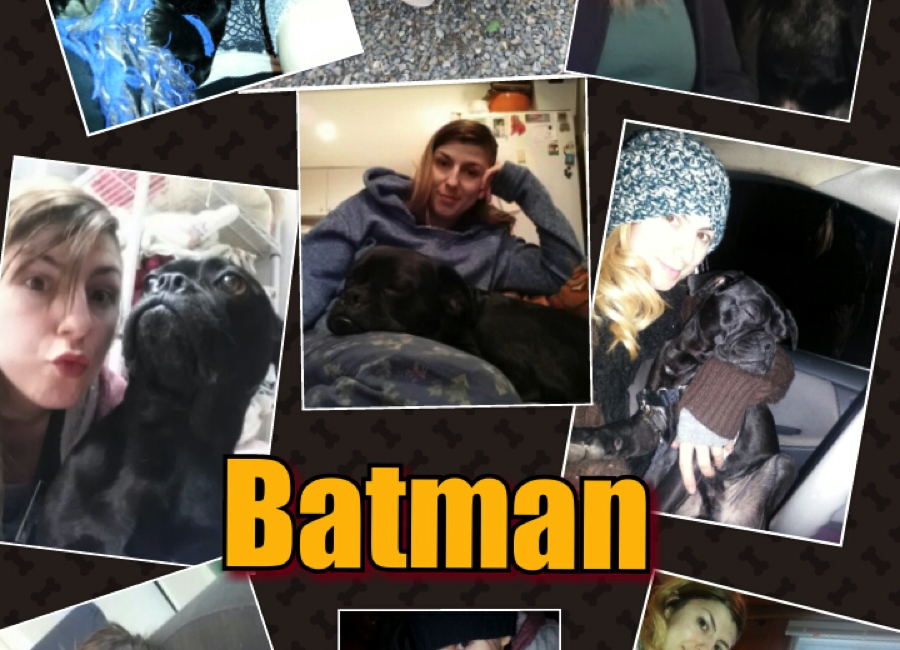 My Journey With Batman – Final Chapter by Gloria F, CSR

My journey with Batman: My personal journey with Batman started mid-October 2014 when I made the decision to open my home and my heart to him. Before then I had not spent much time with Batman, apart from when I would see him briefly at the clinic while I was working. Batman had touched the hearts of so many of the staff that when I heard that our team was in need of a foster home for him I knew what was right. I run Four Paws One Heart kitten fostering and adoption program, and spend a lot of my spare time with kittens and cats, but that didn’t stop me from venturing into canine territory.

Although I have had dogs and puppies in the past, nothing prepared me for the emotional journey I was embarking on. Batman and I quickly began to work on repairing the damage, not only the physical but the psychological damage that living in a world of neglect and abuse can cause. It was heart breaking to look at him and not know what went on in his past and to only imagine the horrible things he may have been through. I began to try to focus on his luck, his luck to have been brought to NTVH, his luck that the staff on shift that night saw something in him and his luck to have beaten the odds and survived. Batman began to improve every day, and it seemed as though he was most happy when he knew he was making me happy. Now all this happiness is not to say there were not challenges because there were many. Batman and I struggled together as we learned what our expectations of each other were. Introducing a dog to a home lifestyle they are not used to made for some funny (sometimes not so funny) situations, like walking into your kitchen with a dog standing on your table. Although at times our struggles seemed overwhelming, I could not allow myself to give up on him. Batman and I learned together and from each other how to believe; he believed in me and I believed in him.

Now with all of that said, I know the question may be “How could you not keep him?” I always knew Batman was not mine forever, I knew there was a purpose for him to have come into my life, but could feel in my heart that there was a family out there that were waiting. Maybe they did not know it yet, but they were waiting for him. January approached and North Town began the process of looking for that family. On January 10th I received an email regarding a lady that wanted to know more about Batman; little did I know that this was the start, the beginning of Batman’s new journey. I first met this family on the night of their trial visit, where Batman would be spending a couple days with them to see how he would fit in. It was hard to fight back the amount of joy I had watching Batman interact with them. It was like watching him be exactly where he was supposed to be. I got to see him at the clinic the next day and even after just one night I could tell we had found where he was meant to be, and although he was excited to see me I felt like he knew that too. Watching the way he looked up at his new family, you could see it in his eyes. That is a moment I will remember and cherish.

No words can describe how I feel when I think of Batman. I am honoured to have been a part of his journey and could not be happier about where he is beginning his next chapter.