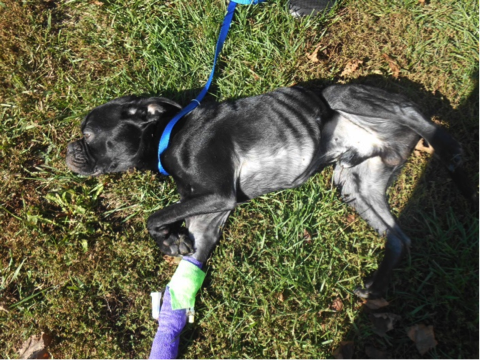 “Saving one dog will not change the world, but surely for that one dog, the world will change forever.”
― Karen Davison

It was a typical night at North Town Veterinary Hospital. The air outside was starting to get colder, and the sun had gone down less than an hour before. Reception answered a call from a civilian who claimed to have found a stray dog on her lawn. Reception advised her to bring the dog in, as the shelter was way past closed.

Soon after, the downstairs medical staff heard quick footsteps coming down the stairs into the emergency room, and jumped swiftly into action. It took me a moment to realize that the creature wrapped up in a blanket in the receptionist’s arms was still living, and I could tell by the look on the technicians’ faces that they were equally as surprised. The receptionist laid a tiny, emaciated, filthy black dog on the table. He was hardly mobile, and curled up in a fetal position as if stuck that way.

When the veterinarian on staff saw the dog, he seemed winded. He was given details while the technicians checked the dog’s vitals. I grabbed blankets and warming pads as he was so cold, the thermometer could not read his temperature. His fur was missing in many spots, and pressure sores covered his legs and paws. He was also caked in his own feces, his hind end was stained with urine, and he had a giant open wound on his back just above his tail.

There are guidelines to follow regarding stray animals. The North Town Veterinary Hospital doctors set a plan in motion to attempt to save this dog. One technician set him up with IV Fluids and pain medications, while I went to work on cleaning him up. Another technician was so affected by him that she opted to stay after her shift was over and volunteered to help clean him up. We cleaned him up, dried him off, treated the wound. Now we could see that he was stable, we set him up in a large, comfy cage next to the doctors’ desks, and offered him food. At this point, he was so weak, that the skeleton-like dog couldn’t even lift his head to eat.

I was working overnight for the next three nights. I got to watch him progress, slowly. On his first night, he didn’t eat until 6am, before I finished my shift when I decided to try and make him a couple of wet food meatballs. His first night was definitely a rocky one – he had little to no feelings or reflexes in his back legs and a horrible lack of muscle mass. By the end of that shift, it seemed the only improvement to speak of was that he had finally eaten something, and was starting to lift his head slightly.

On the second night I walked in to a completely different dog. Everyone at North Town was raving about this dog, and had a sense of hope for him. They of course understood the severity of his situation, and the doctors were being honest about the fact that he may not survive his 72 hours. However, it seemed that everyone’s positivity for him had, in fact, made a difference for the little guy. He was eating small meals throughout the day (starting slow so as not to upset his stomach), and moving around more. For me, his big moment happened late that night, when I opened his cage door and he lifted his leg, ever so slightly, to invite me for a belly rub. For a dog that just one night before was immobile and showed little promise, this was a huge feat. I suddenly felt so sure that this little dog was going to be okay.

On the third night, he was approaching his 72 hours, that period of time that the doctors were unsure that he’d ever see. In the morning, a technician decided to pull him out of his kennel and see if he could stand. When she helped him up, his tail wagged ferociously, as if surprised by his own strength. He was able to stand for a few seconds on his own. The veterinarians were blown away by his progress so far; his hydration was better, his strength and mobility had improved drastically, his wound was healing well, and his personality was starting to shine. However, even after the astounding progress he had proven to be capable of, no one would have ever guessed what he would accomplish next. The following day Batman was able to walk! He even took to rolling around in the grass in the sunshine.

This little dog that had come in nearly dead was bouncing back a little bit more every day. His desire to fight back did not go unnoticed; all of the staff at North Town was rooting for him. At some point, the staff started calling him “Batman”, which suited his contoured figure, quiet disposition and secret past. It was decided that once Batman was in the clear, North Town would adopt him from the Brampton Animal Shelter, and nurse him back to health. It was clear that Batman had no idea ‘how to be a dog,’ and he would need a lot of training. When he was well enough, Batman went home with Katie, the head of the Animal Care department, who planned to foster him for a while to introduce him to other animals and a completely different environment.

We found out some disturbing information about where Batman really came from, more here.