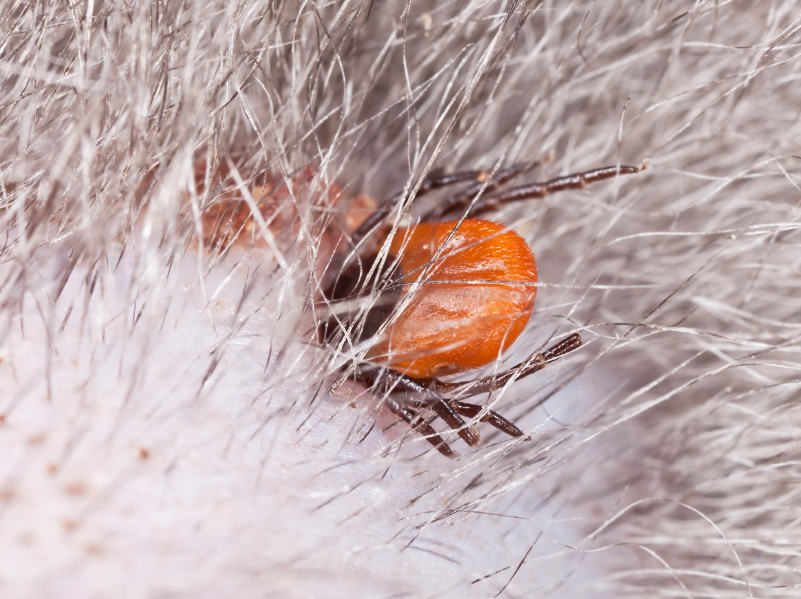 Ticks! For most people, the very thought makes them shudder. These insects themselves are more than just a concern. Ticks can transmit serious diseases to pets and humans. Tick populations have been increasing in Ontario and with them, an increase in tick borne diseases.

The tick life cycle has 4 stages: eggs, larvae, nymphs and adults. At each of the stages from larvae to adults, the tick will attach to a host animal, feed and then fall off to develop into the next stage. The larval stage feeds on small mammals and birds, while the nymph and adult stages feed on larger hosts such as deer, foxes, raccoons and even humans, dogs and cats.

Since ticks are unable to jump onto their host like fleas do, they have developed an ingenious way to find animals to feed on.  Ticks sit on the tips of grass or leaves along well travelled paths. They hold onto their perch with their back feet and have their front feet outstretched waiting to attach to a host animal. They use body odours, heat, moisture and vibrations to sense when an animal is coming past them. This process of finding a host is called “questing”. Once they are on an animal they find a place to attach and feed, often places where the skin is thinner like behind the ear. To feed ticks grasp the skin, cut the surface and insert their feeding tube to suck in blood.  If a tick feeds on an infected animal it will ingest the organism in the blood. When the tick feeds on its next host, its saliva can enter the skin and transfer organisms to the new animal.

There are numerous types of ticks that each transmit different diseases.  Deer ticks (sometimes called black legged ticks) and American dog ticks are found in Ontario. The deer tick is the most concerning as it can transmit lyme disease and anaplasmosis to both pets and humans.  The American dog tick is the most common tick found on pets in Ontario, however it is uncommon for it to transmit disease.

Treatment of these tick borne diseases requires courses of antibiotics.

Tick prevention is the most important part of preventing these diseases.

With ticks and tick borne diseases becoming an increasing concern in Ontario, our veterinarians and technicians would love to help choose the best prevention for your pets.