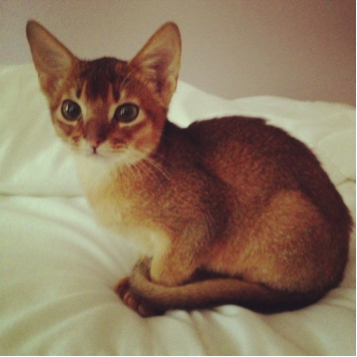 The Story of Baylen “Iron Man” by Gloria Fantegrossi

On July 29th 2012, the Brampton Animal Shelter brought Four Paws One Heart a small kitten. This kitten was no more than 6 weeks old and cute as a button. We could not resist taking this little one on, naming him ‘Baylen’ after his auburn hair.
After his first examination, we discovered this little guy had Ringworm. Since we promised him a good chance at life Four Paws One Heart decided that we would see him like our own pets and began medical treatment right away.

After many weeks of treatment, Baylen was placed in a foster home. It was at this home that Baylen was able to experience the love of friendship and family. The couple who fostered Baylen had also fallen in love with him and planned to adopt him after his treatments.

Baylen continued to visit North Town to be tested for Ringworm and eventually, was clear of this terribly contagious skin condition. It did not take us long to see that Baylen had some other things going on besides his skin issues. Baylen was also fighting off other bacterial respiratory infections that, again, took weeks to treat.

It was on January 17th 2013 that we got the final test results back and Baylen was negative! We were so excited to see him become the healthy looking boy we all hoped he was! His foster parents decided to call him ‘Iron Man’, a name that suited him very well.

Then came January 21st 2013; it was a day that shocked us all. Baylen (Iron Man) came in and he seemed to be off his food as well as breathing quite strangely. He was examined, put on oxygen right away and x-rays were quickly done. It was then that the doctor found something very wrong; Baylen appeared to have FIP (Feline Infectious Peritonitis) a fatal and incurable disease. With only a very small portion of one of his lungs still working, Baylen had to be euthanized. The devastating news was a shock to our staff and Baylen’s foster family.

It is not fair to say he lost his fight as I think Baylen won in a lot of ways. Baylen was one of the strongest kittens Four Paws One Heart has ever had the pleasure of caring for. He had determination, brought happiness to a home, and even though it was for a short time, he taught us all lessons in strength. He brought out the good in people, helping the North Town Team come together, reminding us why we love to work with four-legged family members. He also helped us see the good in others, as we watched his foster family put so much love and effort into caring for him, falling in love with him, and making him a part of their family.

Four Paws One Heart is thankful to have had a chance to know Baylen (Iron Man)!