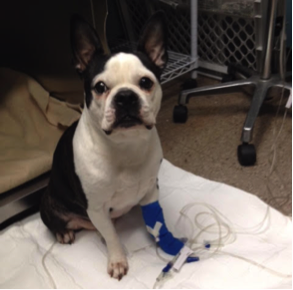 Pet of the Month May: Mox by Nicole Arruda, ACA

“Anyone can give up; it is the easiest thing in the world to do. But to hold it together when everyone would expect you to fall apart, now that is true strength.”
― Chris Bradford

“Mox is a 6 year old French Bulldog, but he still acts just like a puppy. We’ve had him since he was 8 weeks old and from the very start he proved that great things really do come in small packages. By the time he was 9 months old he was housebroken, learned all his commands and played fetch like a pro.  We don’t have any children so Moxy is treated like one of the family and we spoil him as much as we can. To us that means always doing what’s best for him.”

After a busy night at North Town, Mox and his mom Laura came as a walk-in first thing in the morning. When asked what was wrong with Mox, Laura told the staff members that Mox was “just not right” and that she had a gut feeling something was wrong with him.

“He loves playtime and mealtime more than anything, so when we woke up early on that Monday morning and he didn’t jump up immediately to run downstairs and get fed, I knew something was up. Then I noticed he vomited overnight. I even went upstairs with a few pieces of kibble and he just turned away from me… I knew this was serious. I called North Town Veterinary Hospital right away. They said I could come right in, and luckily we only live down the street so I rushed him over immediately. I had to carry him because he was even unwilling to walk. While waiting in the clinic I also noticed his mouth was almost totally white! Dr. Musters saw him and agreed his attitude was strange, took his temperature and after using 2 different thermometers she succeeded. His temp was very low, not a good sign.”

Mox’s exam showed that Laura was right, and Mox was not well. “They really have everything available at North Town and took every precautionary measure to find out what was going on with Mox. Once an x-ray was done, we could see he had a very large mass in his abdomen (8.5”x5.5”). Soon after the ultrasound was done, and it was confirmed that the mass was causing internal bleeding! We were terrified of what was to come; at this point it could have been cancer. We didn’t even want to think of the possibility that he would not pull through. I was prepared to do whatever it took to save him.”

After sending the x-ray and ultrasound images to a radiologist, it was recommended that Mox go into emergency surgery as soon as possible. “It turned out he needed his entire spleen removed and surgery was done right there at North Town by 4pm that day. Dr.Forbes did an amazing job operating and determined that most likely it was a benign mass and there were no other indications of anything else….phew.”

Mox stayed with us in hospital for a few nights following his surgery. “Mox needed a few days of recovery at North Town, so I took the whole week off work to be available for him. The support staff at the hospital was so wonderful, allowing me to come and visit with Moxy as much as I wanted, for as long as I wanted. Even though I could tell he was getting everything he needed-including lots of love and attention (& kisses) I still came in twice a day.”

Mox was a delight in hospital. He recovered well and showed that he had the strength to push through, even giving the staff kisses whenever we went into his cage. After a few days, he was finally strong enough to go home! “When he was able to come home I was so elated with joy and Moxy was pretty excited too. My husband was away on a business trip for a few days so it was really quiet in our home.”

Laura and Mox’s experience is proof that we know our own pets best. If you feel that something is NOT right, there is a chance that something could be very wrong. “Mox is still recovering, but doing very well. He is like his old self again! So it’s just a matter of keeping him calm and quiet at this point until he is fully recovered from the surgery. We are forever grateful to everyone at North Town for keeping our family safe and together for years to come. We plan to take Mox to North Town for all of his future medical needs. Thank you North Town!”