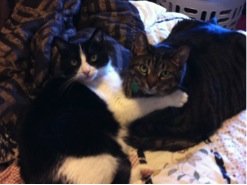 “The greatest glory in living lies not in never falling, but in rising every time we fall.”
― Nelson Mandela

Cats can be very stoic creatures. We don’t always know how they are feeling, or if they are in discomfort. Most of us know our own pets very well and are able to tell when something is wrong. Luckily for Nemo, an eight-year old cat that North Town has become quite familiar with as of late, his parents Jessica and Anthony were able to notice his strange behavior and act quickly to save him.

“Nemo came to my family eight years ago as a companion to my one year old cat Leo. I instantly fell in love with his little black and white face and his friendly disposition. Nemo and Leo became friends right off the bat and spend most of their time together whether they are playing, napping or even cleaning each other.” Jessica says that Nemo is very special to the whole family. “Two and a half years ago Anthony and I met, and Nemo and Anthony instantly fell in love. They have been best pals ever since and Anthony is now Nemo’s favourite cuddle buddy. He even chooses him over Leo and I!”

When Nemo started having problems and showing small signs of feeling not quite right, Anthony knew immediate action needed to be taken. Nemo was taking frequent trips to the litter box, and straining to urinate. “Jessica and I were very concerned and without a regular vet in the area we had no idea where to turn. Growing up in Brampton I always remembered passing the North Town Vet and seeing the 24 hour emergency sign. With a quick internet search I found your phone number and was immediately connected with the staff there. Within seconds we were given all of the information we needed and we quickly brought Nemo to them. I like to think that this quick action from the staff has truly saved Nemo’s life.”

When Nemo was brought to North Town, the doctors concluded that Nemo was suffering from a urinary obstruction from stones that had built up in his bladder and urinary tract over time. At first his urethra was only partially blocked, but over a couple of days the situation worsened.

While at North Town, Nemo went through a series of treatments. He was first treated with medications for pain as well as antibiotics in hopes that the partial blockage would clear. However, when Nemo’s condition quickly escalated, further action needed to be taken. Nemo was hospitalized and unblocked by one of our veterinarians. He remained in hospital for monitoring. Radiographs later showed the stones in Nemo’s urethra and bladder. Surgery was required to remove the stones and clear his urinary tract. So Nemo went into a cystotomy surgery on a Sunday overnight. After waking up from surgery, he had to stay with us for post-operative monitoring. He was able to go back home a couple of days later.

However, the battle for poor Nemo was far from over. A few days after returning home to his family, Nemo came back to North Town with further concerns when Jessica and Anthony felt that he was still not quite himself. Urolithiasis (the process of stones forming in the urethra and bladder) proved to remain an issue that would continue to cause Nemo discomfort without further treatment. It was evident that the only way for Nemo to get better would be to perform a perineal urethrostomy surgery, which would enlarge the opening of the urethra permanently and reduce the chance of any obstruction. So on a Monday afternoon, Dr. Forbes, North Town vet’s medical director, went into surgery with Nemo.

Nemo recovered well from his second surgery and was able to go home the following evening. He was sent home with more pain medications and antibiotics in order to ensure a smooth and complete recovery.

While in hospital, Nemo was very friendly. Despite facing several treatments, being poked and prodded by several different doctors and technicians, enduring two surgeries, he faced it bravely and continued to show affection. Whenever a staff member would enter the Intensive Care Unit and say hello to Nemo, he would get up, rub against the kennel door, and chirp his replies. If you were to pass by the doorway and peek in, you would hear his loud purrs. Jessica and Anthony visited several times during his stay here, and each time, Nemo would get up and get so excited that the technicians had to make sure he didn’t jump out of the kennel! The connection between Nemo, Leo, Jessica and Anthony, is very clearly a strong one.

It is now two weeks after Nemo’s second surgical procedure, and according to Jessica and Anthony, he is back to himself at last. “Nemo loves to play ‘hockey’ and will shoot anything off of the table with his paw that you set in front of him (even the things you might not want on the floor). We love both of our cats and Nemo is a big part of what makes our house a home. A few weeks ago when Nemo became very sick, we were afraid we might lose him. But thanks to the wonderful staff and doctors at North Town he is well on the way to recovery. We cannot begin to express how thankful we are to North Town and their staff for bringing our little man back to us!”