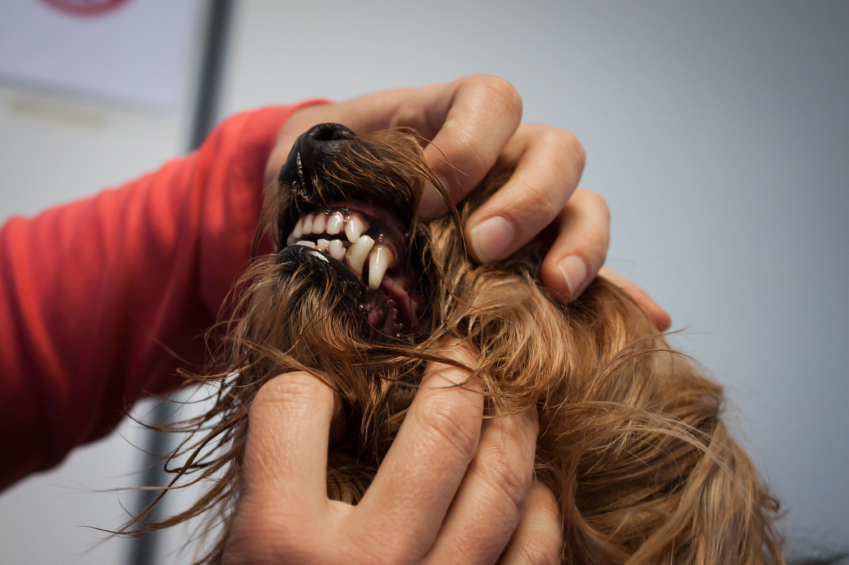 Most common oral tumors in dogs and cats – should we worry about them?

How many of you check your pets’ mouths at least once a month? I have to exclude here the exemplary pet owner that brush their pet’s teeth on a regular basis and like to stay on top of everything concerning their four legged friends. However many owners do not look often enough in their pets mouths or under their tails. The regular checkups with your veterinarian are very important as any changes will be noticed right away. One of those often missed changes is the lumps in your pet’s mouth.

Clinical signs include facial deformity, drooling, bad breath, pawing at the mouth, oral pain, visible mass and decreased appetite.  Your pet may suddenly stop eating or prefer only wet food. Suspicion of oral cancer should be raised whenever the presence of loose teeth is found in a pet with otherwise healthy mouth.

Unfortunately most oral malignancies in animals are diagnosed late, primarily because the clinical signs are hidden in the oral cavity, which is not frequently examined by the pet owns.

Risk factors for most oral tumors have not been determined. Breeds with pigmented (dark) oral mucosa may be at increased risk for developing malignant melanoma.

One study done in cats has determined that exposure to flea collars was associated with 5 times increased risk in developing squamous cell carcinoma.

Epulis is a benign oral tumor found in dogs. Epulis is a general term used to define a mass of any type arising from the gums. These tumors can occur at any age, but middle-aged and geriatric dogs are affected most often. Epulides are most common in dogs such as Pugs and Boxers. While considered benign epulides may invade underlying bone causing bone destruction and loose teeth.

Malignant masses are tumors that have the potential to be locally invasive and can spread to distal sites.

Oral melanoma is the most common tumor of the oral cavity of dogs. They are most common in older dogs over 10 years age. Melanomas originating in the mouth are uniformly malignant. They are locally invasive and have a moderate rate of spreading.

Fibrosarcoma is the third most common tumor in dogs. Fibrosarcoma occurs more commonly in young dogs. These tumors most commonly originate in the gums. They are locally invasive, however spreading is uncommon.

Squamous cell carcinoma is the most common oral tumor in cats. 75% of all oral tumors in cats are squamous cell carcinoma. Older cats (median age of 11 years) are most commonly affected. Tumors can arise in any oral surface, although the tongue is most commonly involved. They are frequently found under the tongue and usually are very advanced at the time of diagnosis. They are locally invasive, but spreading is uncommon.

Fibrosarcoma is the second most common oral tumor in cats, however it is relatively uncommon. This tumor affects older cats as well. Unlike the previous one there does not appear to be a site predilection for oral fibrosarcoma. These tumors are locally invasive, but spreading is uncommon.

Once we have determined that there is a mass in your pet’s mouth several tests would be recommended in order to find out exactly what kind of tumor your pet has. Those tests include oral radiographs and fine needle aspirates where several cells are taken via hypodermic needle, applied on a slide and submitted to a pathologist for diagnosis. More aggressive tests will include sedation and taking of biopsy samples. However with the advent and ease in the availability of advanced imaging techniques, such as computer tomography ( CT ) and magnetic resonance imaging ( MRI ), more accurate tumor depiction is now possible.

The treatment for all forms of oral tumors involves aggressive surgical excision.  It may also involve chemotherapy and/or radiation.

As you know now oral cancer is a serious condition that requires timely diagnostic and treatment. Your veterinarian will recommend the course of treatment or will refer you to an oncologist. Either way finding oral masses earlier than later increases the treatment options and provides for a longer survival time for your pet.