Peter (dad), Marylou (mom), Lauralee (daughter) and Mike (son) are the wonderful owners of Molly, a 6 year old Miniature Schnauzer, also known as Mollo. They got Molly in September of 2010 from a breeder in Milton, Ontario. At first, the breeder showed them four black and white puppies. They were all extremely cute, which made it nearly impossible for them to make a decision on which one they should bring home. It was when the breeder showed them an all-black puppy, that they knew she was THE one. Marylou decided to name her Molly, simply because it is the name of her two children combined: Mike and Marylou’s nickname for Lauralee is Lolly, so together it’s Molly! How adorable!

Molly has been very special to the Miskolczi’s since the day they got her. She has always been unique in her own way to each family member. For Lauralee, she is the best at snuggling and is able to make her laugh all the time. For Peter, she is his reason to get out of the house and go for a walk. For Marylou, she is able to provide her with a sense of comfort and keep her company all day long, since she is retired and can definitely use all that Molly time! Last, but not least, for Mike, she is able to play with him for hours on end, and Molly enjoys every single minute of it! Molly also HATES not having her collar on, to the point where she will actually start crying for someone to put it back on! Her way of showing love and affection is by laying right on top of your head. She will sit right beside her treat jar and cry until she gets one, will drop all of her toys on purpose just to make you get them for her, and will stare at anyone just to get attention… talk about a spoiled little puppy! However, one thing is for sure, do NOT let her little, cute self-trick you, as she is known as the boss of the house especially when playing with her sister Phoebe, the Giant Schnauzer!

Molly wasn’t always a regular patient of North Town. The Miskolczi’s were taking both Molly and Phoebe to another veterinary hospital for their routine annual visits. They decided to switch to North Town when Phoebe was misdiagnosed with parvovirus from their previous vet. Molly, first came at North Town in April of 2012 as an emergency after being stung by a bee. It was discovered that she is actually allergic to the sting! Ever since that incident, the Miskolczi’s knew that they could trust the caring veterinarians and support staff at North Town. This had proved to be truer than ever when Molly just recently became one of North Town’s critical patients.

Just before Christmas, Molly was brought in for continuous vomiting, decreased appetite, and was overall very lethargic. After performing many tests (x-rays, fecal analysis, blood work, ultrasound), what they had originally thought was a simple case of whip worm (an intestinal parasite) turned into something much worse. It was discovered through these tests that Molly has a cancerous mass, which is unfortunately not treatable and inoperable. This was extremely devastating news for the Miskolczi family, but with the help of North Town Veterinary Hospital, she became a Christmas miracle! She is still with us to this day, and we have nothing but hope for the future.

Ever since bringing Molly home after spending a lot of days and nights at North Town, she seems to be back to her normal, playful self! She is still on medication, and may always need to be, but her personality has improved a great deal since the big scare. She still manages to play (and boss around) Phoebe, and her appetite is back, which involves always begging for treats! Although she still has cancer, she never ceases to amaze her family members with how well she is doing! If she wasn’t already the most spoiled dog in the world before being diagnosed, she definitely takes the crown now with all the extra cuddles and love that she gets every single day! The Miskolczi’s are very thankful and grateful for every moment that they get to spend with Molly, as it truly is a blessing in more ways than words can even explain.

Below is a recent photo of Molly from the weekend of January 21st, 2017, enjoying her hike at Rattlesnake Point! Her pose screams “Super Molly”, and she should definitely be wearing a cape to complete the superhero look! Great Job, Molly!

“Don’t wait for a miracle… be a miracle!” 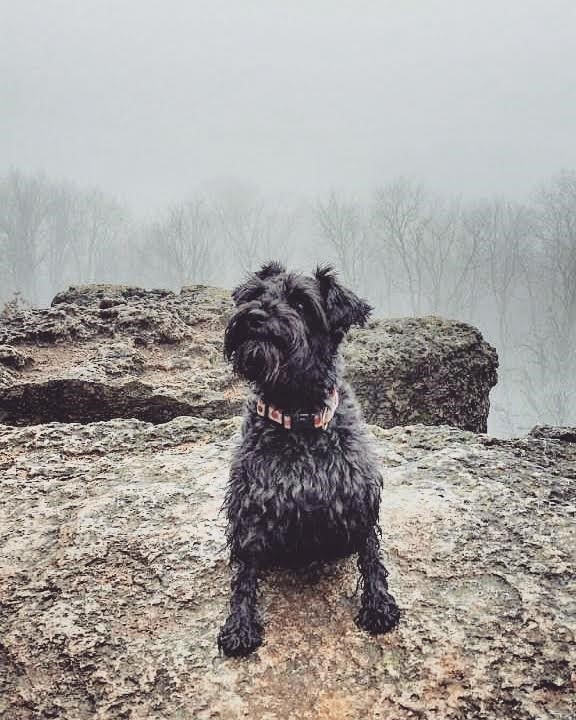