Pet of the Month: Thelma

“It came to me that every time I lose a dog, they take a piece of my heart with them. And every new dog who comes into my life gifts me with a piece of their heart. If I live long enough, all the components of my heart will be dog, and I will become as generous and loving as they are.” – Unknown Author 909

Thelma was adopted by one of our staff members, Gloria Fantegrossi, in April of 2016 from the Oakville Milton Humane Society. Katie, one of our Animal Care Attendants, was working there at the time and was there when Thelma was brought in from an unfortunate situation. Thelma definitely pulled on Katie’s heart strings with her sad little face and being the oldest of the bunch suffering from what was thought to be mild IBD (inflammatory bowel disease), she was at the bottom of the totem pole for adoptions. Thelma was living at the shelter for a year before Gloria started her search for her very first dog. With some convincing, mainly because Gloria has always been keen on large breed dogs, she came out to meet the famous Thelma that Katie could not stop talking about… And the rest is history.

Thelma tested positive for Heartworm in May of 2016 and had begun treatment at North Town. Along with Heartworm, Thelma had many other medical issues. She always had a cough, and there were a few times where her lungs would crackle, which raised concerns of her having pneumonia. With her also suffering from IBD and liver disease, x-rays and ultrasounds were done to monitor those conditions. Then, in October, she started to bloat, when the veterinarians discovered that she had fluid in her abdomen and chest. We did blood work, which showed us that her Albumin (a blood protein) levels were abnormal, resulting in her not being able to flush out fluid normally. One of our technicians made a measuring tape so that Gloria could keep track of how round Thelma’s belly was getting, or if there were any improvements. Thelma became very uncomfortable and was not able to do simple activities such as getting in and out of the car, or jumping on and off the couch. The veterinarian that was working on her case did a lot of research, which resulted in getting Thelma started on some new medication that began to work quickly and she looked to be on the road to recovery.

As usual for Thelma, it was one thing after another. Come January, we began to see changes with her urine as she appeared to be dribbling blood. So, YET AGAIN, we began with various tests to figure out what was going on. Because she was on so many medications, some that were immune suppressants, she was more susceptible to infections. We were able to get her back on some antibiotics and she again started to improve.

With Thelma having to do so many tests so often, and needing so many different medications, it became quite costly. We all knew that Gloria was doing her best to make Thelma as comfortable as possible, so the staff here at North Town decided to raise money to help towards Thelma’s vet bills. Gloria spends so much time fundraising and helping whoever and whatever she possibly can. She has raised thousands of dollars for animals that are in need, and participates in all sorts of community outreach programs. She always has and always will put others’ needs before her own. With that said, and with great success, we were able to raise $390! Might I add that this was all done without Gloria’s knowledge, and when we shared with her our little secret, she was lost for words (in a good way)!

On January 29th, while taking Thelma out for a quick bathroom break during Gloria’s shift, she collapsed outside and was rushed back into the clinic. The veterinarians and support staff were quick to assess; her heart rate was low and respiratory rate was higher than usual. Thelma was hospitalized overnight but was able to go home the following afternoon. A few days later on February 1st, Thelma collapsed again. She had to stay on oxygen in hospital and was being monitored very closely. After a few days, Thelma was ready to go home where Gloria was able to spend another week with her, monitoring her at the comfort of her own home and enjoying her company.

Unfortunately, on Saturday February 11, 2017, it was with great sadness to announce that Thelma had passed away peacefully on her own at North Town Veterinary Hospital. It was an evening that both Gloria and I were working, and it was extremely heartbreaking. I still remember that day as if it were yesterday, and it still gets me choked up to think about it. Both Thelma and Gloria were surrounded by the support and comfort of not only colleagues, but friends.

After Thelma’s passing, Gloria received many cards from people who were touched by Thelma’s story. Cards came from staff members at both North Town Veterinary Hospital and the Oakville Milton Humane Society. Clients of North Town and many of Gloria’s friends and family also sent her cards, expressing their deepest condolences and extending their sincerest sympathies.

“You’re the best mom! Thelma was one of a kind and will be missed every day! You two were soul mates.” – Lee Ann Johnson, RVT

“Thelma was a very loving and sweet lady. She was a true fighter. She was very lucky to have you. May happy memories of her bring you comfort.” – Dr. Arik Vishnevsky

“You two were the luckiest ladies to be involved in each other’s lives. She is loved and will be missed.” – Liz Moulton, RVT

Gloria was overwhelmed with gratitude and was so thankful for everyone who was there to help during this very difficult time of loss. She can take comfort in knowing that Thelma was loved by many and like the true “stubborn little old lady” that she was, she left us when she was ready. 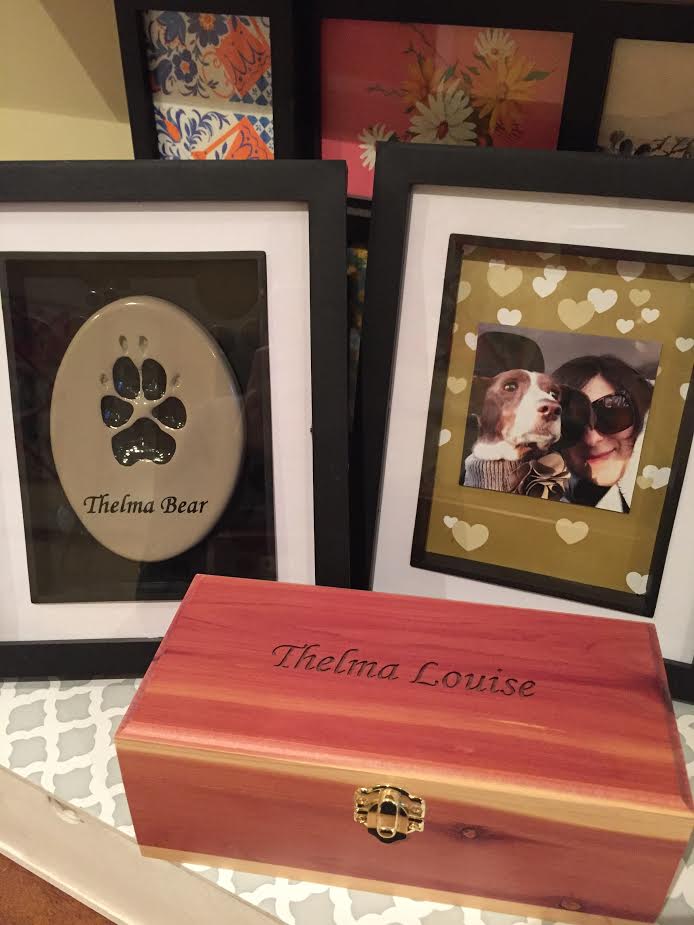