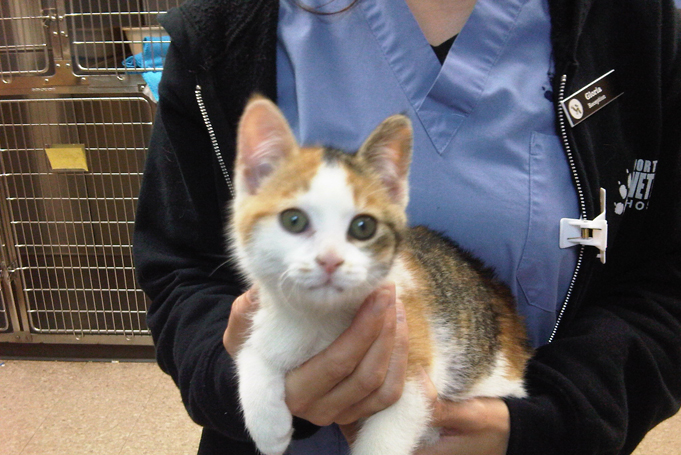 Maxine came into North Town Veterinary Hospital at about 8 weeks old. She had been found by a couple who had decided to take her in and care for her. It was not long before the couple realized that Maxine may have something special about her.

It appears that Maxine has a disorder called Cerebellar Hypoplasia. This is a neurological disorder that affects the part of the brain that controls coordination and balance. Cerebellar Hypoplasia comes from a kitten’s unvaccinated mother who contracts distemper while pregnant. Although these kittens generally have trouble with their motor skills, they are able to live relatively normal lives.

Prior to the understanding that we now have of the disorder, kittens found to have C.H. were often put to sleep. Yet nowadays many of these kittens end up in shelters.

After a lot of carem love and thought, Maxine’s guardian angels brought her into Four Paws One Heart. Without a doubt, we took her in. Maxine is being fostered right now to monitor her limitations; she is doing fantastic and has a lot of company including a 2 year old female cat, Wednesday, who also has Cerebellar Hypoplasia.

Maxine is looking for her Forever Home.

Gloria at North Town, and coordinator of Four Paws One Heart, has put together this Blog to educate possible owners on Cerebella Hypoplasia. Click here to learn more about this disorder and wonderful cats like Maxine!

Living with a Cat with Cerebellar Hypoplasia

While I have never lived with a cat who had cerebellar hypoplasia, I have learned a great deal from researching on the internet and exploring forums. I have considered putting my name on a shelter waiting list, and have come to better understand the limitations of these beautiful and sweet cats.

You must understand that living with a family member or pet who has physical limitations will change your life. You will need to go beyond “kitten proofing” and prepare your home to handle the specific physical needs of these cats. Please consider the following tips and make sure to check out the links below if you have a cat with cerebellar hypoplasia or are considering bringing one into your home!

Choosing to Adopt a Cat with Cerebellar Hypoplasia

It’s very likely that if you encounter a kitten with cerebellar hypoplasia it is because you were kind enough to take a feral animal into your home, and then discovered that she was pregnant. If, on the other hand, you have learned about these wonderful animals and have decided to adopt, you need to make some considerations.

Can Other Animals have Cerebellar Hypoplasia?
Yes.

Cerebellar Hypoplasia can occur in dogs as well, and occurs when a puppy develops an infection while still in the uterus (much the same as with cats). In many cases, the source of the disease is unknown or can also be genetic.

Breeds that show the genetic form of the disease are: Irish Setters, Airedales, and Chows.

In dogs, the disease appears to be connected to the herpes virus and may develop similarly to cats with distemper.

How can Cerebellar Hypoplasia be Prevented?

The simplest answer to this question is: vaccinate your pet. By obtaining proper veterinary care for your pet, you are reducing the risk that your animal will bear a litter of kittens with cerebellar hypoplasia. Even better, have your cat spayed so that she won’t bring more unwanted kittens into the world.

Unfortunately things aren’t always that simple. There are many, many unwanted (feral and stray) cats who don’t have homes. These cats are rarely spayed and almost never vaccinated. A human who really wants to make a difference will become involved with a TNR (trap, neuter, release) program and will make an effort to ensure that these animals are altered and receive their shots. There are low-cost neutering organizations in most major cities that can help you to get this job done.