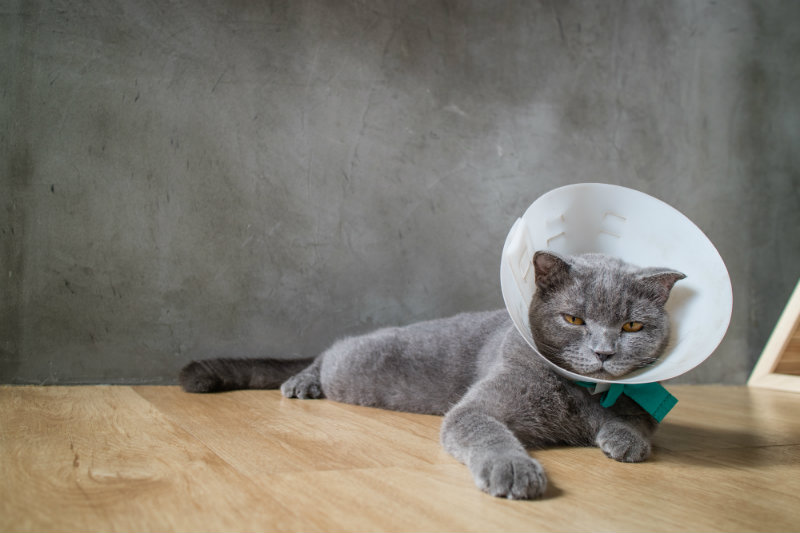 Keep The Cone On!

You have just gone to the animal hospital and picked up Fluffy or Fido after their medical procedure or surgery. Along with instructions for care and medications to go home you are presented with and expected to employ a simple yet extremely important protection device. This device will keep your furry family member from licking, biting, pawing, scratching, or rubbing the area of their body that is injured, sore, or has surgical sutures or staples in it. It is meant to protect the animal from hurting itself.

Yes, friends, we are discussing the dreaded “Elizabethan collar” so named for the silly high collars worn in the Elizabethan era (think Shakespeare). Also known more commonly as an “e-collar”(not to be confused with an electric shock collar), or ‘cone’, ‘dunce cap’, ‘cone of shame’, ‘satellite dish’, ‘lamp shade’, ‘party hat’…etc. It is simply meant to be put around the animal’s neck, encircling the head and creating a protective barrier between the head and mouth from the rest of the body. This barrier stops them from biting or licking at their lesion, wound, incision site etc., or to protect head lesions, including eyes and ears, from being scratched or rubbed by the animal. They come in many varieties, from clear to shaded plastic, from soft plastic cloth materials to soft or more rigid plastics. Some can be custom fit with velcro strips while others have pre-cut sizes which snap together.

A well fit cone will be snug around the neck, loose enough to get one or two fingers between the collar and neck, but tight enough that the animal cannot remove it. Any hard edges should not be applying pressure to the neck. The cone should extend a little past the tip of the nose of the animal, depending on the area of the body you are protecting. For instance, wounds near the tips of the tail or feet may require a longer cone as the animal can access these areas with their mouths more easily. With head wounds or lesions, the cone is meant to protect the face, eyes, and or ears from being scratched or pawed at, or from being rubbed against surfaces such as the floor, sofa, walls, etc. and could, therefore, be slightly shorter.

It is not a punishment or a torture device, despite what cats or dogs may want you to think. A cone or e-collar is an extremely important protective device. Animals may object to it, sometimes strongly or obsessively, at first. They may use passive measures such as hanging their heads down as if in shame or bumble around the house smashing their now gigantic heads into the furniture, or walls, or, my personal favourite, the back of your legs. Many will pretend they cannot eat or drink with the cone on. Others will be more dramatic and may furiously try to remove the e-collar with their front and/or back legs. Some will thrash around crazily, jump around acrobatically, and contort their bodies in an attempt to dislodge the infamous cone. Be strong, these are mere theatrics. Fido or Fluffy is trying to make you feel sorry for them or feel guilty for being a cone warden.

The time for ‘tough love’ is now. The cone should stay on until the site is fully healed, and/or the sutures are removed. Most sutures and staples are left in for 10-14 days. Other lesions may take less or more time than that to heal completely. A good general rule is to leave it on until the re-check appointment with your vet, at which time you will be advised as to whether the cone can come off or should remain on.

Many animals, especially felines, will pretend they cannot access their food, but keep in mind they are refusing to access their food and water bowls with their cones on out of protest. The bowls can, if the protest is severe, be propped up on other items such as a box or books, or another bowl turned upside down to make access easier. The bowl could also be positioned and held by the owner’s hand inside the cone to allow the animal to eat or drink. For the very stubborn cases, the cone can be temporarily removed while the animal eats, but only under direct supervision. Direct supervision means the animal is in direct sight of the owner, and the owner is able to immediately stop any undesired licking, biting, rubbing or scratching. As soon as the animal is finished eating, or the owner is not in direct supervision, the cone should be immediately and securely replaced.

Houdinis:  some animals are very good at escaping the cone. In these cases, the more secure fastening of the e-collar may be necessary. These can include tying the cone to the animal’s regular collar or harness or even creating some type of harness out of gauze bandage etc. This may have been done at the hospital prior to discharge. As always, feel free to call your friendly neighbourhood RVTs at NTVH for suggestions.

Unfortunately, not everyone will leave the cone on, for whatever reason. Some animals may cause or prolong infection. Others may rip out their sutures and need another trip to the vet and may even require another anesthesia to repair them. Some will dislodge surgical implants or damage casts and splints. Many times this leads to an injury or infection that is much worse than the original injury was. Many animals have injured themselves quite severely, painfully, and sadly even fatally. I have personally viewed the aftermath of both a dog and cat who both eviscerated themselves after routine spay surgeries, simply because they were not wearing a cone. The dog survived after an additional emergency surgery which included removing a damaged spleen. The ramifications of the incident will be lifelong for her. The cat was not so lucky, and the poor girl was euthanized. Both would have been perfectly fine after her spay had the cone simply been on. Another horror story is about a Pug after an eye surgery that scratched out the globe of his eye and then proceeded to eat it.

Yes, friends, these stories are extreme examples and are meant to scare you, only for the good of your furry family member. What makes these tales extra woeful is the simple fact that they could have been prevented by using a simple device known as the cone. Sounds pretty simple, right! And if you feel mean and guilty for making them wear the cone now, just think of how you will feel when something bad or fatal happens. It really is a straightforward decision:

PLEASE KEEP THE CONE ON!!!

P.S. On the brighter side: once, a good friend of mine, Rosie, a yellow lab, hated her cone, until she quickly learned that Caprice, her bossy feline house mate, could not slap her in the face when she had the cone on. In fact, I saw the expression of realization on her face when she discovered this. After years of living under the tyranny of the cat, it was payback time. Let me tell you friends, I never saw that cat get so much exercise….but that is another story for another day. The main relevance here is that the function of the cone is PROTECTION.

Until next time friends