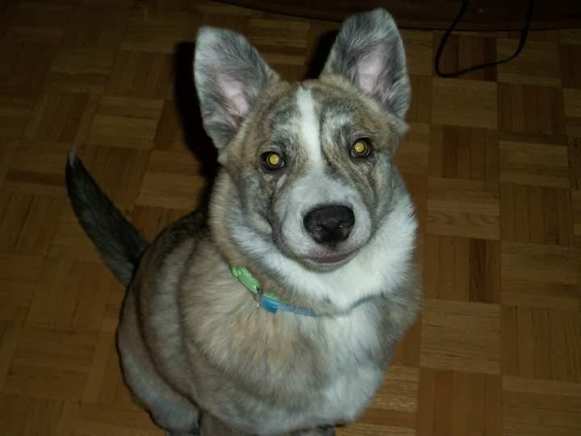 Parasite season is just around the corner! It is important to use parasite prevention on your pets to protect against fleas, ticks, and heartworm. Many people think that because their pet stays indoors, they don’t need to be on parasite preventative, or that these parasites don’t exist in Brampton. This was untrue for Roxi, one of our Animal Care Attendant’s dogs, who was diagnosed with heartworm in 2016.

Brittany got Roxi in July of 2011 when she first got her own apartment and wanted a dog to keep her company. Brittany first heard about Roxi through a friend, who knew someone that was selling puppies in Brampton. Brittany’s friend and roommate also got a kitten, Chikoo, the same day that Brittany got Roxi. What was thought to be a lonely apartment turned into a full house pretty quickly, as Roxi and Chikoo grew up together for 5-6 months. Roxi was only three months old when Brittany got her and had only left Brampton ONCE in her life when Brittany took her to Albion Hills Conservation Area in Bolton.

Before Brittany got Roxi, her friend showed her pictures of all the puppies that were left. Brittany chose Roxi because of the stripe on her face and was promised that she was a male. After picking her up, Brittany brought Roxi to the vet for an examination just to make sure that she was healthy. After filling out paperwork, and checking Roxi off as a male, the veterinarian informed Brittany that the male she thought she had gotten, was actually a female! As she was leaving the veterinary clinic, the veterinarian said: “don’t worry, we won’t charge you for the sex change!” Although hilarious, Brittany was still shocked as she was promised a male dog and already had a name picked out, which would’ve been “Osiris.”

Fast forward to April of 2016, when Roxi was brought to North Town for limping. Bloodwork was recommended and the profile included a 4DX test, which tests for heartworm and tick borne diseases. Originally, Brittany was not considering getting this test, but as a spring promotion, it was included and was cheaper than the normal bloodwork profiles. And it was a very good thing they did! The results showed that Roxi was POSITIVE for heartworm, and had a very large amount of microfilaria (the larval stage of the worms) in her bloodstream.

The process to treat heartworm is very complicated, long, and expensive, and can take up to TWO YEARS to clear. Before we could directly treat the heartworm, we had to prepare the body for the treatment, which takes two months. Melarsomine, an injection that kills the adult worms, requires permission from Health Canada to even receive!

Currently, Roxi had her first heartworm test on in February of 2017, and the results came back NEGATIVE! In another three months, Roxi will have to take one more blood test, and if it is negative again, she will be officially clear of heartworm! Roxi will always need to remain on Advantage Multi (a parasite preventative) for the rest of her life, and also needs to do a heartworm test once a year. Always remember that it’s much easier to keep your pets on parasite prevention every year, instead of having to put them through the long and tedious process of treating heartworm… and YES, it does exist in Brampton!