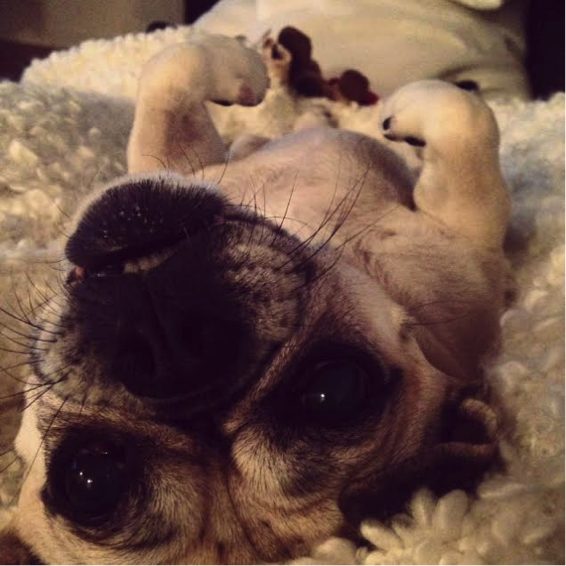 “A dog is the only thing on earth that loves you more than he loves himself.” – Josh Billings

Dahlia is a five year old Pug / Jack Russell Terrier mix. She has been visiting North Town since the beginning of August for some urinary concerns. Many people know about cats (mainly males) having issues caused by bladder stones or crystals, however not many people are aware that these concerns are very real in the dog world as well.

Dahlia joined her family in the way many puppies do, when Sheena found her at a breeder and it was love at first sight. “When I decided I needed a fur baby in my life, I began searching online and found a breeder in the GTA. I made an appointment to come and see the puppies and instantly fell in love with Dahlia. By instantly, I mean I literally pointed at her and said, “I want that one!” Despite the breeder handing my sister and I other puppies (I guess he wasn’t entirely impressed with our way of picking puppies.) But we both knew she was the one.”

At home, Dahlia is a ball of energy who loves attention. “Dahlia is the love of my life, full of strange and lovable little quirks. She’s the biggest suck. Some of her favorite things include: giving kisses (many, many kisses), rolling down hills (she’s done this ever since she was a little fur ball), being held like a baby, being tucked in at night, snoring like a little old man, stealing socks right off of your feet, hoarding toys (she tries to play with 2 or 3 at a time), playing with the cat, basking in sunshine, playing fetch in water and then catching a quick nap in the floating water tubes (she’s a terrible swimmer and needs a life jacket).”

Dahlia first went to the vet when Sheena noticed something was off regarding her urination habits. “The symptoms were so subtle at first! A couple of months ago Dahlia began needing to go pee more frequently. At the time, I thought it had been for attention since we had moved and recently got a cat. I ended up taking her to a different vet when the frequency started to seem a little strange and discovered she had a UTI. She began antibiotics and had a diet change. We were warned that with the new food (Urinary SO) she would pee more frequently, which is to avoid the accumulation of crystals. After testing and treatment she was still peeing quite frequently which was thought to be a by-product of the food. During her follow up appointment she still had bacteria (although reduced) so it was thought to be an aggressive UTI. After attending North Town (for something entirely unrelated) we had brought up the symptoms to the vet whom suggested an x-ray, upon which we discovered she had multiple bladder stones.”
Dr. Merali, our weekend emergency veterinarian, first saw Dahlia and kept her for the day to run some tests. Due to number of stones present, Dahlia would require a cystotomy surgery (removal of stones from bladder) to reduce further incidences of infection, as well as to prevent a urethral obstruction from developing.

A few days later, Dahlia arrived for her surgery. Dr. Baroughi performed the cystotomy, removed all the stones from her bladder, and ensured a smooth recovery. Samples from her bladder wall were taken to send to the lab, as well as samples of the stones themselves to determine exactly what type of stones Dahlia was dealing with. Dahlia again had to be kept on a proper diet formulated for urinary health, and was on a strict schedule of antibiotics and pain management medications. Dahlia was sent home the next day.

“She has had an excellent recovery! There was a bit of a reaction to the stitches (she’s had that issue in the past) but after getting this miracle cream from North Town the stitches have since healed amazingly and she’s back her little puggy ways, aside from the new strict diet!”

Dahlia has had follow-up tests, urinalyses, and cultures, and while it may take some time, is so far on the road to a full recovery!