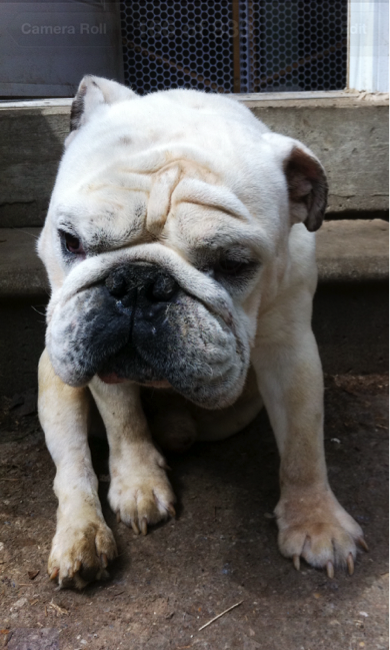 “You never know how strong you are… until being strong is the only choice you have.”

Henry is a wonderful 8 year old English Bulldog who came to North Town Veterinary Hospital one cold night 3 years ago just around Christmas. Henry had many sightings around town running free until one night it was just too cold. Henry was picked up by a pedestrian and was brought into our animal hospital; he was weak and malnourished.  Upon first physical examination it appeared he was just weak, he stayed a few nights and became stronger. It was then that our Brampton veterinary team realized he was very special indeed.

Henry has a form of scoliosis where his spine is curved. It is a genetic condition. Along with this his ribcage appeared to be off center and he was very unsteady on his feet. He had to be helped outside to use the bathroom but that didn’t stop him. As he grew stronger over the days, so did his spirit.

At this time one North Town team member started to fall in love.  She could see the strength in his spirit and how much Henry wanted to do things on his own. When he was deemed healthy enough to go, the Brampton Animal Shelter picked him up and attempted to find his owners. Henry stayed at the shelter for 14 days with no owners found.  All this time, the wonderful technicians there let our staff member visit every day and take him out and feed him.

When it was time for Henry to find a new home, there was no doubt where he was going.  His new mom drove there with a big smile on her face, she couldn’t wait as she always wanted a Bulldog- he may not be the most picturesque of Bulldogs, but he was hers.

Henry has a lot of trying times. He has had many visits with the neurology department in Mississauga Oakville Centre. They always admire his sideways gate. Henry is the life of the house and of the dog park! While all the other dogs are running and playing, you will find Henry trotting up to human strangers and flopping on his back for belly rubs! Some people are confused by his awkward appearance, while others marvel at how friendly and happy this little guy is!

If you ever see our North Town wonder trotting in the dog park, make sure to say hi!!