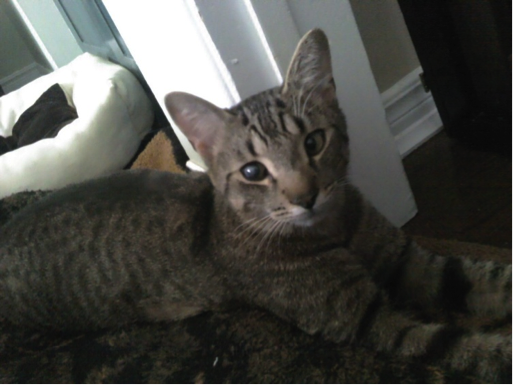 Pet of the Month June: Thomas by Nicole Arruda, CSR

Working in the veterinary field one is exposed to the happiest of stories, as well as the saddest. All in one day, you see tears, smiles, wagging dog tails, purring cats, and a lot of different emotions. I can’t tell you how many times someone has told me, “When my pet passes, I don’t think I’ll ever get another. This is it.”

Most times this isn’t actually the case, but loss is hard and grief has a way of weighing on people. What I have come to learn working with animals is that you feel empty when the day comes that they’re not there. People constantly feel as though they would be “replacing” their lost family members, but Tom and Sheena had a different way of looking at things.

Sheena called us one morning on a weekend in January, devastated that she and Tom had just found their perfectly healthy 14 month old cat Ren deceased. He had no warning signs, he had just passed. She wanted a necropsy done on him, and asked that her other cat, Roxy, who was only two, be examined to ensure it was nothing she had to be concerned about. Dr. Merali, our weekend veterinarian who deals with emergencies, saw them shortly after.

She sent Roxy home with a clean bill of health and later called Sheena and Tom with the necropsy results. While the physical necropsy was relatively unremarkable, histology reports from the lab provided a clearer answer. Ren had underlying hypertrophic cardiomyopathy, or heart disease, which causes thickening of the heart muscle and leads to further complications. Of course, the family had no idea that this underlying issue was present and Ren was gone before any other clinically concerning signs had appeared.

After their grieving period, Sheena, Tom, and Roxy were ready to open their home up to a new pet. The loss of their Ren had inspired them to find a cat with special needs to take care of. After doing some research, they found a cat rescue called “Pet Friends 4 Life” which had a page on their website listing special needs cats requiring a home.

The couple visited the rescue facility and instantly felt it was right for them. “It’s a neat concept at Pet Friends 4 Life, because we got to visit with many cats all at once, with no cages!” They ended up picking a cat that they felt would suit their home at the time. His name was “Thomas”, and he was blind in one eye. A family had found him that way and brought him straight to the rescue. Tom says that Thomas approached him. “Instead of picking a cat, it seemed like we both found each other.”

Thomas went home to his new family. He had to be kept separate from Roxy (a feisty Tortie!) until she accepted him into her territory. Thomas and Roxy bonded well, and Thomas is doing very well in his new home. According to Tom, his eye doesn’t seem to hinder him much, and Thomas still carries on like nothing is different about him. 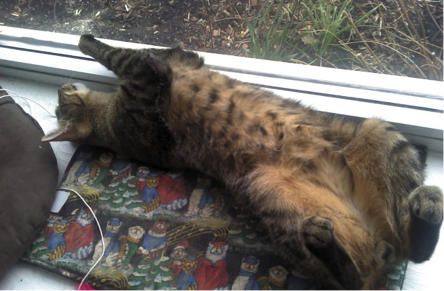 Of course, loss is hard. We never want to say goodbye to the ones we love. Tom and Sheena are one example of a family who have experienced loss, accepted it, and have given another animal in need a chance he may not have ever received. It’s not about finding a replacement for our pets – it’s about finding the room in your heart and home to offer to another pet who needs it. Thomas is lucky to have found Tom and Sheena that day! 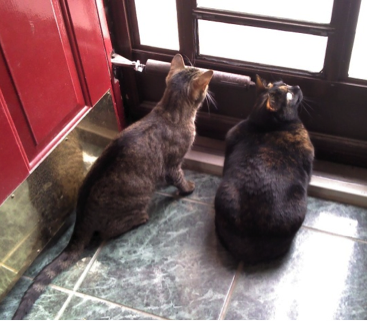