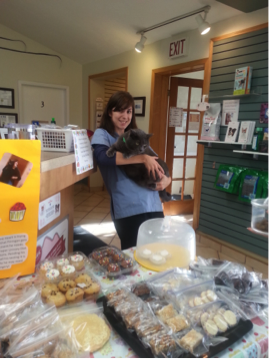 “All great beginnings start in the dark, when the moon greets you to a new day at midnight.” ― Shannon L. Alder

Finnigan is a 5 year old, male, all grey cat who weighs in at about 25 pounds of pure love! He came to North Town Veterinary Hospital one day when his owner, who was terminally ill, opted to put him to sleep because he had nowhere else to go. Upon meeting Finnigan and seeing what an affectionate cat he was, Dr. Forbes, our medical director, asked Four Paws One Heart (volunteer foster and adoption organization) to take Finnigan in. Gloria, the founder and adoption coordinator of Four Paws, took on the challenge and set out to find a forever home for him. She even decided to keep Finnigan in her home as a foster pet until the day came for him to have a place of his own.

It didn’t take long for someone to fall in love with Finnigan. He went home with a sweet grandmother of two young kids and a feline sister. His new mother did a lot for him, bringing him to North Town whenever he needed anything. However, soon after, Finnigan fell ill with urinary issues, and his owner became overwhelmed with his medical needs, the finances needed to treat him, and the fact that he was complicating the behavior of her own cat.  She opted to surrender him back to the rescue. So, it was back to North Town for Finnigan, who had a urinary tract infection, and back to the waiting game for him to find a family.

Finnigan was suffering from urinary crystals, which later caused a blockage in his urethra. Because he didn’t have a family, North Town’s team all worked together to guide him through this difficult time, treating him like a member of the family. From the doctors who treated him, to the receptionists that took him for “therapeutic walks” on his personal harness, everyone teamed up and gave him the love he needed to bounce back. Even our clients sprang into action to help out, as Four Paws One Heart had their most successful bake sale ever, all for his treatments. During Finnigan’s time at North Town, word got around about him, and clients visiting asked about him as though he was a feline celebrity. His story even brought complete strangers to tears in the lobby. It seemed everyone had a soft spot for him.

Finnigan stayed at North Town for a while, and went through an unblocking procedure on two different occasions. He had a strict medication schedule and a prescribed urinary diet. However his urinary issues continued, and these efforts proved to be inadequate thus far. Finnigan went into surgery with Dr. Musters for a perineal urethrostomy. This surgery widens the urethral opening to allow more room and minimize the chance of obstruction. The surgery was a big success and Finnigan recovered at Dr. T’s cottage, relaxing and taking some vacation time from the hospital. His recovery there went smoothly. As he waited for someone to adopt him and take him to his forever home, Finnigan went back to Gloria’s house as a foster.

During the time that Finnigan was at North Town, one particular family was in and out of the hospital quite a bit with their senior cat Yasha, who was unwell. Tom and his family had two cats at the time, and Yasha’s illness proved difficult for her sibling, Mewshu, a tiny 13 year old cat of less than 5 pounds. After Yasha’s family had done all that they could do, it was unfortunately time to say goodbye.

Mewshu did not react well to the loss of his sister. He started hiding, stopped eating, and seemed extremely depressed. Tom visited North Town several times with Mewshu after Yasha’s passing. After trying several treatments and running tests, Tom and his family decided that Mewshu needed another feline friend to keep him company. A kitten wouldn’t work… as a senior, Mewshu wouldn’t be able to keep up with a kitten, and in his weakened condition, it wasn’t a good idea. Tom heard about Finnigan through the North Town grapevine and asked Gloria about him. After meeting Finnigan, Tom and his family decided to give him a home, and Mewshu a new sibling. He knew that Finnigan was a big commitment, as he had medical needs to attend to, but he rescued him anyway. In turn, Finnigan ended up rescuing Mewshu.

Looking back, Gloria says that Finnigan could not have found a better home, and that he is her biggest success story through Four Paws One Heart. “Sometimes when I am stressed about the rescue, I remember Finnigan and how everything came together for him. I couldn’t be happier for him.” While Finnigan was sick, he had no family to guide him through it, but all of North Town (even the clients) acted as his surrogate family. Everyone pulled through for him, and he is a reminder that sometimes a second chance can make all the difference. Throughout his journey, Finnigan remained the loveable big guy we first met, always rolling over to invite his caretakers to scratch his giant belly. Though he has been through a lot, he is a reminder of how incredible animals can be – not once has he lost his love for human contact, and he is still so open to any little bit of affection. All he really ever wanted was to be loved. We are so glad to see him happy and healthy!

Mewshu (who was refusing to eat despite trying every variation of diet) started to eat again, and is continuing to eat Finnigan’s prescription urinary diet! He slowly came out of hiding, out of his depression, and started to become himself again. Finnigan is a big hit with his two new human siblings as well, and even cuddles up with the baby. According to his new mom, “Finnigan is such a sweetie…he fits right in and he is super good with the kids!” Even though his brother can’t pick him up, he lets him try anyway.

Finnigan and Mewshu recently boarded with us while Tom and his family were on vacation. The staff was incredibly happy to see him, and could definitely see that he hasn’t changed a bit! He is still a big, loveable guy, who welcomes all belly rubs and never stops purring!