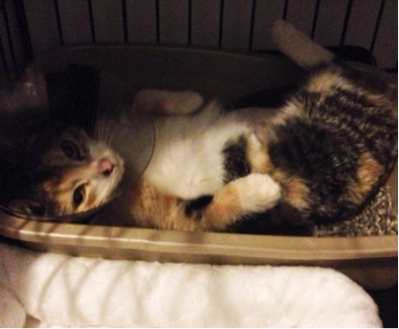 “I want the world to know that everybody deserves a second chance.” – El DeBarge

Joplin is a five month old kitten who came to us as a stray with a lame hind leg. She was exhibiting signs of extreme pain and under the instructions of the Brampton Animal Shelter, the North Town staff took x-rays of her legs. It did not take a professional eye to look at these x-rays and see that the kitten was very broken. By the looks of the x-rays, in fact, this kitten’s leg had been broken for a while.

At this time, Joplin was considered a feral stray kitten. She was less than pleased with us manipulating her sore leg, poking and prodding, and she displayed some signs of aggression. She remained under the Brampton Animal Shelter’s care for the appropriate 72 hours on IV fluids and pain medications while they waited for a possible owner to come forward. When no one came to claim the kitten, no one was surprised. She was terrified and confused.

However, after the pain medications started to kick in, the kitten’s personality began to show. She would allow herself to show affection, purring and head-butting the staff members when she wanted to be cuddled. Katie, one of the assistants at North Town, noticed this. She asked Gloria (receptionist at North Town and co-ordinator of Four Paws One Heart rescue) to step in for the sake of this kitten. Gloria, who is up for any challenge, agreed to save her, and after experiencing this kitten’s display of affection, I volunteered to foster her after her treatments.

When the Brampton Animal Shelter’s allotted 72 hours came to a close, and she went under the care of FPOH, I decided that this kitten needed a good strong name to prepare for her new life. I chose “Joplin,” as I am a fan of rock music, and I wanted to name her after a bold female figure. Gloria with help from the medical staff, decided that Joplin would have a leg amputation surgery since a repair would be very hard on her. Dr. Jon Forbes, North Town’s Medical Director, performed the surgery. Afterwards, we found that amputation was the correct choice, as her injuries ended up being far more extensive than anyone initially realized. She had multiple fractures, and must have been in a lot of pain for quite some time; explaining her initial aggression. It was a long, difficult surgery, throughout which her blood pressure and temperature were inconsistent. Following the surgery, she bounced back and recovered well.

Joplin’s true personality was extremely evident after her leg had been removed. She purred whenever I touched her, she rolled over to expose her belly, and climbed up on my arm to curl up and cuddle. She still did not like being picked up and carried, however. There would be a long way to go.

Two days after the surgery, I was able to take her home for fostering and recovery time. She travelled extremely well: with the carrier on my lap, she nuzzled her head into the bars and curled up quietly. Once she was in my apartment, she became a new kitten. She remained in a crate on bed rest, with intermittent laps around the room to stretch her limbs and learn how to walk on three legs. She became fascinated with my two adult cats, rolling over and purring whenever they approached her. Anyone who visited my place was fascinated by her resilience, her affection, and her ability to adapt. She is more than open to meeting strangers… she now rolls over for everyone.

It has been three weeks since Joplin came to my home, and the growth she has shown is remarkable. She now comes out of the crate on her own, she hops around with more confidence, and I can now lift her up and carry her without her attempting to get away. She is learning to play with toys, loves her food, and enjoys sitting on my lap. She will come to me and throw herself onto my legs to purr until falling asleep. Her stitches have been removed, and she is healing very well. She is now ready for a forever home!

I have watched Joplin endure pain, undergo surgery, and grow into a truly loving kitten. I am so thankful to Gloria and Four Paws One Heart for giving her a second chance, as sometimes in this industry it is so easy to forget that second chances are possible and are not hopeless. Joplin is a strong, wonderful kitten, and any family will be lucky to have her!