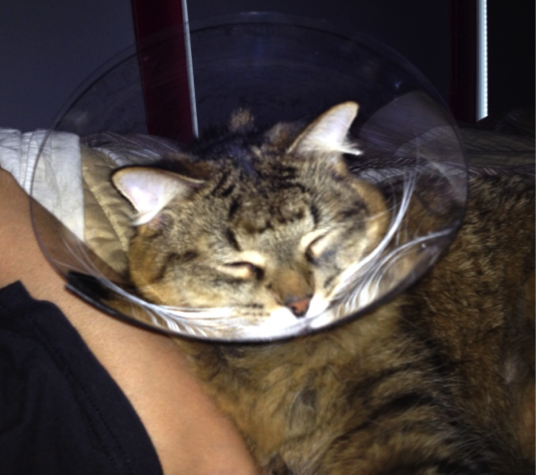 “Besides love and sympathy, animals exhibit other qualities connected with the social instincts which, in us, would be called moral.” – Charles Darwin

Darwin was found  in March of 2013 by Ian and his family in Bancroft during a visit to Grandma’s house. “They live at the top of a huge hill in the middle of the woods. It was a nice warm day so we decided to go for a walk. We stopped to look at some buckets that were collecting sap to make maple syrup when suddenly we heard loud meowing from off in the distance – it was Darwin. He was small, cute, brown 3 month old tabby that had apparently been abandoned in the woods. He was not scared of us at all and purred immediately when I picked him up. We didn’t know what to do, but he really gave us no choice because he followed us all the way back to my mother’s house. She called around to neighbours and the local animal shelter… nobody was missing a cat.”

Darwin joined the family that day. “We decided to keep him. I was a little worried about bringing another cat in the house since we already had a 2 year old female cat, but they became instant friends. 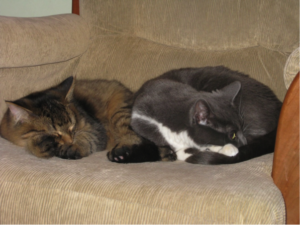 We took him to North Town Veterinary Hospital to check on his health. The vet said that he had an ear infection, but was otherwise a healthy 3 month old kitten. We named him Darwin since he was able to survive in the woods for who knows how long on his own. I have attached a photo of the journal entry that my five year old son wrote about finding Darwin. Here is the translation if it is too hard to read: 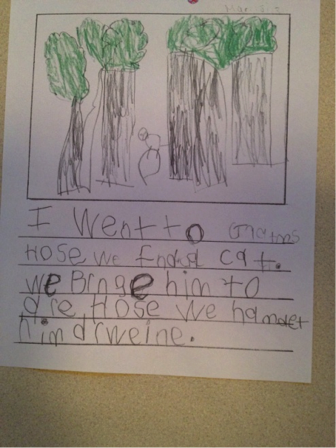 “I went to Grandma’s house. We found a cat. We brought him to our house. We named him Darwin.”

In the summer of 2013, Darwin was neutered and declawed at the North Town Veterinary Hospital. Until recently, Darwin had been fitting in and getting on just fine in his new home.

During the last week of June and the first week of July, Ian noticed multiple instances of vomiting, in the living room, the kitchen, and in the basement. “Since I only caught each of the cats vomiting once, I wasn’t sure if one or both cats were sick. At first, I wasn’t too worried because cats tend to vomit and they were both acting fine, but when it lasted for over a week I decided to take both of them to the vet to see what was going on. The vet examined them, took their temperatures and said that there were no obvious signs of problems with them other than the vomiting. They were also given bloodwork to help figure out what might be going on beneath the surface. The cats were both prescribed some medicine to calm their stomachs and we were on our way.”

“The next day, I saw more vomit in the basement and on the tile in the kitchen and on top of that Darwin was no longer acting normal. He was very quiet and moved very slowly. I knew something was not right so I made an appointment to see the vet again. Darwin was now dehydrated from all the vomiting and needed to be hospitalized. I was relieved with hospitalizing Darwin because I knew something was wrong and that the doctors at North Town would figure it out and make him well again. I went home and worried a lot.”

Darwin was lovely in hospital. All of the staff members talked about how nice and well-behaved he was during treatments. His personality definitely showed, even though he wasn’t well.

“On Monday morning, I called the vet and they told me that he had vomited a large amount of bile in the middle of the night, but that he was now well hydrated. The bloodwork and x-rays did not reveal any real answers. On Monday afternoon I called again to see how Darwin was doing. He looked much better, but was not still interested in eating. We decided to book him for an ultrasound which would happen on Tuesday morning. At about 12:00 pm on Tuesday, Dr. Forbes called me and said that the ultrasound showed that there was a foreign object in Darwin’s intestine that was a compete blockage. He would require emergency surgery. I quickly agreed and prayed that he would be okay. At about 1:30 pm, Dr. Forbes called to tell us that the surgery was a success and that Darwin would likely recover very well. I was so relieved and thankful.”

The next day, Darwin was well on his way to recovery, and was allowed to go home. “We got a call from the vet letting us know that Darwin was eating well and recovering from his surgery quite nicely. We could pick him up later that day. So, after my son’s baseball game, we all went to pick up Darwin. The vet gave us all the post-surgery instructions and showed us the foreign body that was trapped in Darwin’s intestine. We looked at it carefully and even touched it. It was rubbery and almost looked like an ear plug or something. When I turned it over I saw that it had a small hole. I knew exactly what it was. Darwin is always chewing something and one day he must have been chewing on the rubber grip of one of the sticks from our table top hockey game. He likely accidently swallowed it and it caused all these problems. I have attached a photo of the foreign body and hockey game.” 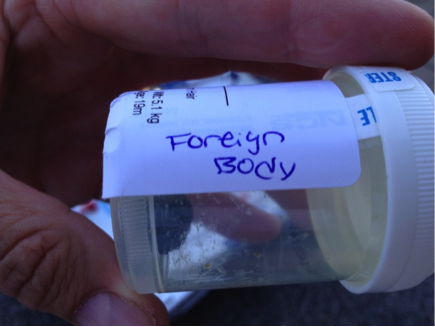 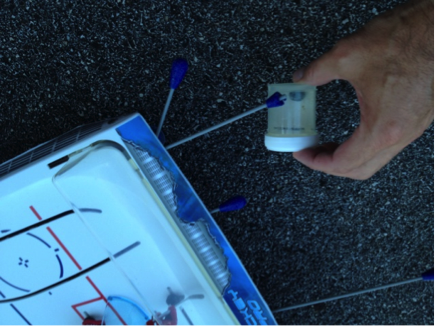 “Darwin was quite sleepy the first couple of days back at home, but is now back to his normal self. We are so thankful to have him back and for the wonderful care he was given at North Town Veterinary Hospital. Thanks so much.”

We are all glad to hear that Darwin is well again! 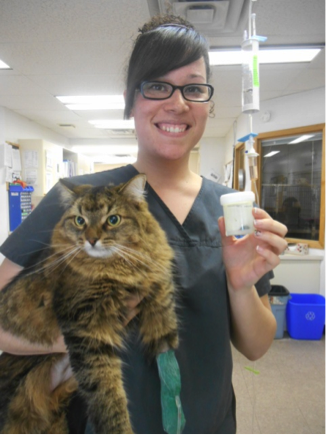