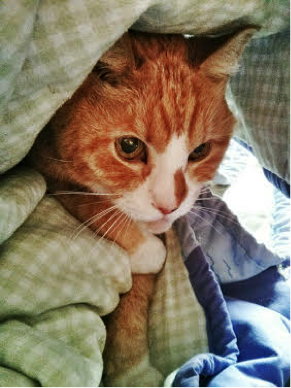 “I have studied many philosophers and many cats. The wisdom of cats is infinitely superior.” ~Hippolyte Taine

The Ides of March have nothing on orange and white tabby Azrael (also known as Azzie), who just celebrated his 19th birthday on March 15th. Azzie was adopted by his mom Beverly in March 1997 from the Halifax Humane Society in Daytona Beach. He has lived with her in Tampa, FL and Atlanta, GA, and finally settled here in Brampton five years ago.

Azrael has had a number of other animal friends in his day. He was with fellow feline adoptee Snuggy for 15 years, and lab mix Beyla for 14 years, as well as an assortment of guinea pigs and gerbils. While those friends have all passed on, Azzie currently loves to snuggle with his two young companions, Ninja and Phaedra, tortoise-shell litter-mates adopted from Toronto Cat Rescue through Pet Valu in 2013.

A senior for more than half his life, Azzie is an example of a cat who has made good use of his nine lives. He’s had a number of health concerns from two urinary crystal blockages, to being diagnosed with diabetes in 2008. On top of that, he’s had two bouts of near-deadly pancreatitis and liver inflammation. Even though there have been a few times Beverly has been certain he was finally succumbing to his old age, Azzie has bounced back every time. In fact, between his frequent snoozes, he still enjoys his feather toy and catnip ball, during moments when he forgets his age.

Because of his medical needs (three medications per day, plus every-other-day subcutaneous fluid administration), Azrael has a skilled pet-sitter to watch him when Beverly travels, and sometimes he is able to join her if it isn’t too far of a journey.

Each time that Azrael and his parents enter North Town’s lobby, most of the staff is able to recognize them before opening their file. Frequent medication and fluid refills allows us to check in and find out how our 19 year-old super-cat is doing. Beverly often tells us that it is easy to forget his age because he is still acting like a kitten at heart, playing with his toys and cuddling with his little sisters.

Azrael is very well-behaved at the vet, which is a surprise. Many cats his age are grumpy and somewhat set in their ways (I would be too!). Azrael is very mellow, and has grown accustomed to these visits due to his veterinary history. We are very happy to see that he has overcome all his battles, and are thrilled to see his ongoing resilience. A big part of his strength comes from his parents, who have been willing to fight these battles with him throughout his long life.

Senior cats definitely do take more time and often more expenses, but they are worth it. We are pleased to see that Azrael’s home has indeed been a forever home. Are you ready to adopt? North Town frequently has cats for adoption through Four Paws One Heart. Remember that adopting a cat can be a very long commitment – just take a look at Azrael and see!