Otis is a 6 year old Dogo Argentino and his brother Tyke is a 3 year old Presa Canario.
They love eachother very much and we love them even more!

We got Otis when he was 3 years old! We drove 4 hours to go see him and when we got there we had to take him home. He is the most lovable, happy dog you have ever met! Him and Tyke hit it off right away. The previous owner had a big piece of land. The previous owner let Otis roam free on the land but once in the house he was put in a cage. It was very sad. He was not allowed to be free in the house.

We decided it was our duty to bring him home to be loved inside and outside the house because he deserved it. When we took him home he didn’t know what to do with his freedom inside the house so he followed me everywhere and still does.  He would not go on the bed or the couch but eventually he learned he was allowed and now we can never get him off! He is a gentle giant! Whenever we go to the dog park he wants the affection of the people instead of the attention of the other dogs. He really is a character. He sleeps at bottom of my the bed sometimes and I  have caught him with his head on my pillow. He thinks he is a human!

He loves his brother Tyke. They play all the time! His favorite toys are anything with a rope attached to it. Otis likes to taunt Tyke with it and makes him run after him. They also love to sleep together and they play-fight really rough at times but it’s all love! Otis is a very special dog and I wouldn’t trade him for the world!  Yes it’s true that we have given him a wonderful home and love him dearly but I could never repay him for the way he has touched my heart. 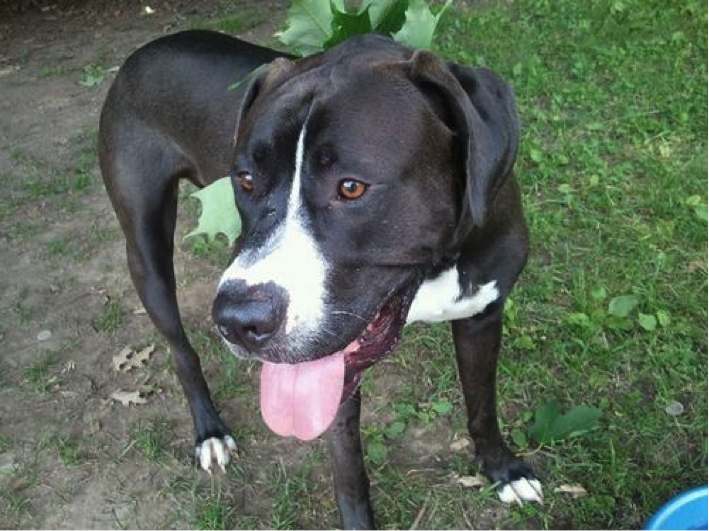 Our bundle of joy arrived to us at 9 weeks old. It was Tahliesa’s 16th birthday and a surprise gift to her! She was shocked and super happy because she’s had been asking for a puppy for so long. He was a chubby puppy, weighing in at 20lbs! He loved to play!

Tahliesa tough him right away to ring the bell when he wanted to go outside. Until this very day Tyke has only had one accident in our house and that was the very first day we brought him home. As he got older we took him for walks which he loved! He is very smart, and learned tricks quickly; he would do anything for food! We took him to puppy school which he enjoyed a lot!

He grew so fast! At 6 months I decided to let Tyke out of the crate when we weren’t home to see if he would be okay to roam the house. When I got home he had flipped my leather couch over and ripped it to pieces. Guess he wasn’t ready to be left alone just yet! We got his brother Otis shortly after this incident and the two have been inseparable since. They roam the house freely now… no more destroyed couches, yay! They love to play together and cuddle too. Both our boys even donate blood to other canines. They are strong and healthy so I am happy to say they can give back to their own kind. Tyke’s personality fits right into the family and we couldn’t ask for a better pup!