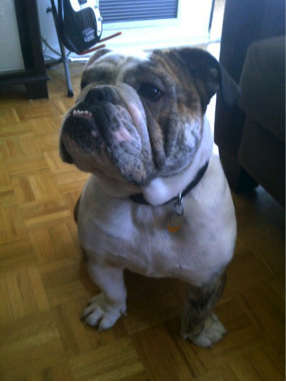 I always wanted a little boy Bulldog that was brindle in colour, but had always had shelter dogs growing up. For Christmas in 2009 Bart had bought Oliver for me as a surprise. He was a tiny little ball of wrinkles and the moment everyone in the family met him they all fell in love with him.

Oliver has always been a stubborn little puppy who knows how to get his way with his mommy. He is very cuddly, and loves to sleep in your lap. He always follows you around and sits with you while you go about your day in the house. He is a very friendly dog who loves to have the opportunity to run and play at the dog park with his friends.

When we first got Oliver, we knew that he was the runt of the litter and already had some health problems. He was born with an elongated pallet which severely hindered his breathing. When he was approximately 8 months old, he underwent surgery to correct this, along with cherry eye (in both eyes) and neutering; it was recommended to do it all at once due to the anesthetic process. A few months after recovering from that, he started having problems with his reproductive organs, and had to have surgery for this not once but twice.

By the time Oliver was two years old, he started having little fits of extreme itchiness. He would scratch his ears or bite at his paws for 10-15 minutes at a time, and if we weren’t there to stop him, he would scratch the area until it would bleed. We brought him in to North Town Vet to find out what was happening and it turned out to be an allergy. In order to cut back on the itching, we changed him over to hypoallergenic food and treats, and made everyone in the family aware that it was all he could have. We had a few good months this way, but then he had a bad attack that ended up with him spending the night at the vet. North Town was able to fix him up, although we were still not sure what triggered the attack in the first place.

Over the next few years, Oliver was put on Benadryl to relieve some of the itching when he got bad. This was great news for us as I was already taking it for my own allergies and being able to give him something that I always had on hand was very convenient. I was glad when one of the vets at North Town gave us this tip, as long as we ensured to inquire about safe dosages for him.

In about May of this year, Oliver started to get what looked like a rash. His skin became very itchy and caused his allergies to go haywire. We brought him back to North Town and the vets gave us a little stronger of a medication to clear up this new itch, along with a new medication to clear up the minor skin infection he had as a result. Oliver was on these pills for about 6-8 weeks and cleared up almost immediately. It was nice to see my little guy back to normal again as he had been very lethargic during the first couple of weeks of the infection.

A month after the pills were finished, the rash started to come back but was minor at first, so we gave him some Benadryl and he seemed to itch less. We monitored his condition which proceeded to get worse in a short amount of time. He started going bald in certain spots, and black patches of skin started appearing under the bald spots. He was still itchy and scratching himself to the point where he would bleed, so we brought him back to North Town to see Dr. Forbes again, as he had helped Oliver the last two times. Dr. Forbes immediately suggested that Oliver stay at North Town for the weekend, as the infection was definitely more serious this time. The staff of North Town took great care of Oliver over the weekend, and although it was hard for us to be separated from our little guy, we knew that he would be in great hands. We were very happy to know that North Town could make arrangements for us to visit him, which we took the opportunity to do. In the 24 hours that we had not seen him, he looked like a completely different dog. The treatment had obviously been effective immediately and he was back in good spirits again. This was evident by the continuous barking that the staff at North Town had to endure all weekend!

Oliver was released looking the best that he has in about 6-8 months. We have been very careful to keep him inside for the most part, and we have changed all cleaning products and other items used in the house as we still do not know what he is allergic to. It has been a long process, but we are hopeful that we are nearing the end of his “attacks”!