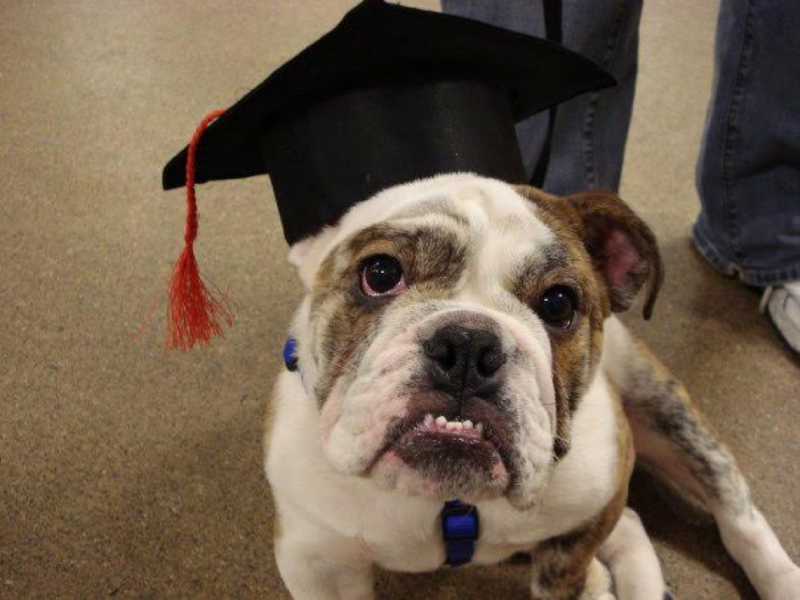 Oliver – As If Severe Allergies Were Not Enough

Oliver is a 7-year-old English Bulldog. You may remember Oliver from a few years back when we featured his story about his struggles with severe allergies.

Oliver is definitely a class clown. He is also very stubborn, and if he does not want to do something, there is no way that he will! If you ask him to do something that he does not want to do, he will make a noise very much like the human “psssshhh” and turn his head away in disgust! He absolutely loves tennis balls and blankets… so if you have a blanket, you better let him lay on it or else you will get a very disapproving look. He is extremely cuddly and always has to sit while touching someone, whether that be his head on your lap, or his foot out in front of you to ensure you cannot get up! As a puppy, he learned how to wave hello and goodbye, which always makes people laugh. No one ever leaves the house without getting covered in lots of Oliver’s slobbery kisses!

Unfortunately, it is not always smiling in the life of Oliver as he does suffer from severe allergies and was diagnosed with Lymphoma in April of 2016. Here is the story of Oliver… the strong and brave Bulldog who is determined to keep fighting no matter what life throws at him.

Oliver was a Christmas gift to Stephanie, from Bart. It was exactly seven years ago on December 13th when Oliver was given to Stephanie. They got him from a breeder located in Conn, Ontario. He was the last one left in his litter and was the runt of the litter.

At first, Stephanie and Bart were taking Oliver to Bolton Veterinary Hospital, where he got his annual vaccinations and examinations. In the beginning, they realized that a few veterinarians would not see him due to his breed. They only ended up at Bolton Veterinary Hospital due to the fact that a friend of theirs also had a bulldog and brought their dog there. As Bart is the only one who drives, it became very inconvenient to go to Bolton whenever there was an issue, especially since they are only a 9am-5pm operation.

They then made the decision to contact North Town Veterinary Hospital, and we were more than happy to take Oliver as a new patient! They transferred Oliver to us just before he turned two years old. Stephanie is very glad that she did as he soon developed an allergy that the doctors at North Town are educated in and experienced at treating.

Let’s fast forward to April of this year, when Oliver came in for his routine annual examination and vaccinations. During Oliver’s physical examination the doctor noted some abnormalities and recommended further diagnostics including blood work and tissue samples.  The results from these further tests revealed that Oliver had lymphoma, a form of cancer.   The severity was unknown, so the doctors here at North Town urged Stephanie and Bart to seek consultation with an oncologist immediately.  It was decided that Oliver would receive his care at Mississauga Oakville Veterinary Emergency Hospital and Oliver was seen within the week by Dr Gauthier.  At that time

At that time Dr. Gauthier was able to stage Oliver’s Lymphoma with the severity falling somewhere between stage 3 and 4.  His internal organs had already began to swell, causing him to be very lethargic.  On initial consultation with Dr. Gauthier it was decided to start treatment with chemotherapy.  Because of Oliver’s pre-existing allergies, he had been taking steroid medications and thankfully that medication helped to slow the growth of the cancer leaving everyone feeling very hopeful.

After Oliver’s first week of chemo, he did not feel well at all. He was not the crazy little guy that he had always been, now spending a lot of time in his bed resting. However, after the second round of chemo, they began to notice a steady improvement. He slowly started to eat more and become more playful!

He became very good friends with one of the registered veterinary technicians in oncology, Erin. Sometimes it was difficult to get him into the car every week as the chemo progressed. You could tell that he hated being prodded with a needle so often, but one mention of going to see Erin was enough to lift Oliver’s spirits!

About two thirds of the way through the process, Oliver began having bad allergy attacks and therefore started developing calcium deposits that looked like very large solid scabs. They also started to turn black, which scared Stephanie and Bart. Thankfully, the dermatologist at the Mississauga Oakville Veterinary Emergency Hospital was able to give Oliver some antibiotics and an ointment to help break down the calcium deposits.

Currently, Oliver has finished his chemotherapy treatments. It took a lot of time to run Oliver back and forth to the Mississauga Oakville Veterinary Emergency Hospital which solely rested on Bart, as Stephanie does not drive. It was definitely not an easy process and quickly became costly as well, but Stephanie and Bart were willing to do anything they could to make Oliver feel better. Oliver is now back to his normal, playful self! He will still have to go back for regular check-ups for the rest of his life, as the cancer does have a possibility of returning. Stephanie and Bart are very grateful to be able to celebrate another birthday and Christmas with him.

“Bulldogs are miracles with an attitude”