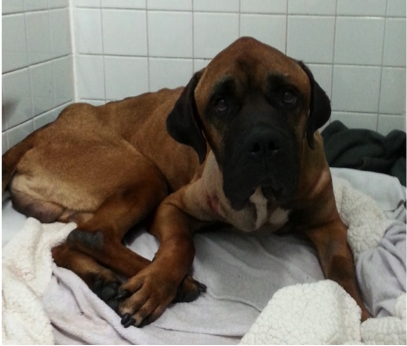 Love at the end: The Story of ‘Sir Hugo Henry’

Let me start by telling you, this is a story not of fairy tale endings but a story of what unconditional love is, what it means to bond and why I would do it all over again!

Looking into the eyes of one abandoned dog is like looking into the eyes of all abandoned animals, all the animals who were left by their owners to suffer alone. ‘Sir Hugo Henry’ was brought in as a stray dog left with no one to claim him. His body was frail and told a story of heartbreak. His eyes were filled with love and hope, hope that he may be able to receive that love back, hope that someone would look out for him and hope that he could be happy again.

As staff of North Town Veterinary Hospital cared for this dog, they were truly touched by his gentleness and his amazing demeanor, his heart was bigger than that of any human.

As I write, I remember the first time I saw him, standing so nicely as his wounds were being cared for. You could see in his face how much he enjoyed the attention and love he was receiving from all of the staff. It was that moment that my heart told me that this dog was meant to play a part in my life, little did I realize the part I would play in his.

I run a small program, Four Paws One Heart, that takes in abandoned kittens and fosters them until they are ready for adoption and although he was no kitten, he was abandoned and in need, so I took him in.

Many of the doctors where concerned with his condition and testing was done right away to ensure he got all the treatments he needed.

A couple days later we received the results, ‘Sir Hugo Henry’ was suffering from Lymphoma and even with medication he may only survive a couple of months. Our hearts were devastated and filled with sadness. I knew it would be tough but I made him that promise when I took him on, a promise to care for him and ensure he was loved for the rest of his life, no matter how long. I prepared to take ‘Hugo’ to my home to allow him to be loved as he should.

It was an exciting ride home, with kittens in the car, ‘Hugo’ could barely settle down, he was wagging his tail with excitement. Once home he settled right in, happy to be invited on the couch and (awkwardly) sat watching me, as if he didn’t know what to do. ‘Hugo’ spent the night doing all the fun things a dog should do, snuggles, following cats around the house and going for (short) little walks.

Sleeping was tough and the crate was not where he wanted to be, even after I brought out my pillow and blanket to lay in front of it. It did not take us long to decide he was sleeping in the bedroom with me.

He wagged his tail for his early morning washroom break, he enjoyed investigating the entire yard, able to be off leash; he was free.

Shortly after I could tell he was not feeling well and we went back to the clinic to get him looked at.

The doctor’s eyes could not hide it during his exam as she knew it was time and she delivered that news to us. I think there were a million thoughts running through my head, “but we were going to…” and “I wanted him to…” but looking at him, his eyes said “I am ready”. He was ready and I needed to allow him to choose to go gracefully, to go while he felt loved. I felt like he had just been waiting that whole time, waiting to have that one last perfect day, a day he was able to feel the love that every dog should have. I knew that I could not be selfish and keep him here any longer.

The rest of his day was filled with love as those who cared for him at the hospital got to spend time with him.

His last moments were spent with those closest to him as we said our good byes and watched him go peacefully to Rainbow Bridge. My heart was filled with joy for him that he knew he was loved, he knew we cared and he knew we would not let him suffer.

It is a story I wish I could change the ending to, a story I hate to have to tell and a story that will be with me forever.

I can only think about how truly blessed I am to have gotten to give that gift to him, to be so special to have gotten to spend with him his last night and what an honor it was to have been able to receive that love back from him.

‘Sir Hugo Henry’ will forever have a piece of my heart and although our time together was short, I will always remember his strength and love.

“It came to me that every time I lose a dog they take a piece of my heart with them. And every new dog who comes into my life gifts me with a piece of their heart. If I live long enough, all the components of my heart will be dog, and I will become as generous and loving as they are.”
― Unknown Author 909