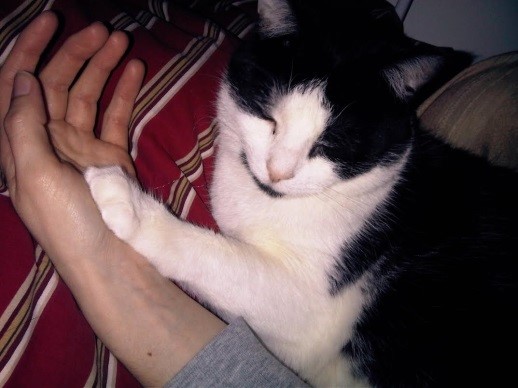 Pet of the Month: June “Stanley” By: Nicole Arruda, ACA

“Animals are reliable, many full of love, true in their affections, predictable in their actions, grateful and loyal… Difficult standards for people to live up to.” ~ Alfred A. Montapert


Stanley is a 5-year-old cat who belongs to Gloria, NTVH Client Service Representative. He was born around March of 2010, found on his own near a dumpster, and brought in by a good Samaritan who heard his cries and could not leave him. Gloria, who is the coordinator of the Four Paws One Heart Kitten Program, took him into the rescue and brought Stanley home to foster him.

Gloria and her roommate, Katie, had a full house at that time, watching over not only their own pets, but also fostering several kittens. Stanley was one of many. After an eye infection and parasites were treated, Stanley and his other kitten foster siblings were old enough for adoption.

As each kitten found their forever home, Gloria could not believe that everyone had passed up on Stanley. After a few months of him waiting for a home, she decided to take him back to her own house, for good this time.

Stanley not only adjusted quickly to life at Gloria’s again, but as time went by and Gloria fostered more kittens, she noticed that he began to show interest in each kitten that came home. He loved to cuddle, groom, and play with the foster babies, and this behaviour has not only continued, but “He has become an amazing member of the FPOH team. He even earned the nick name ‘Stanley the foster mom’.” As many know, hand raising kittens can be tough and it is not always easy for a person to teach them all the ‘cat’ things they need to know. Gloria says, “You can tell how excited Stanley gets when I walk in with a carrier of new kittens. He spends the first few days by the side of the carrier, sleeping and watching over them until they can come out to play. Once Stanley gets his paws on the kittens, he spends his days teaching them to clean themselves and play with each other like good kitties should.” This behaviour is rare for a cat, but extremely helpful. Many housecats want nothing to do with kittens that are brought home as part of the foster program.

Sometimes Gloria brings home kittens with special needs, previously she brought home a kitten named Maxine who had cerebellar hypoplasia and a sweet blind kitten named Stevie. Stanley is extra helpful in these situations, as he is able to teach them how to properly act like a cat. Stanley recently worked very closely with Stevie and gave her one-on-one care. He is also extremely friendly with dogs, and was close friends with Batman, NTVH’s rescue dog, who resided at Gloria’s house for foster care as well.

Gloria is so proud of Stanley’s work with each kitten, cat, or dog that she brings home. It is always exciting to see this little once foster cat, now foster mom, in action! 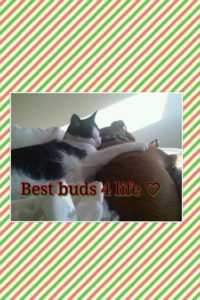 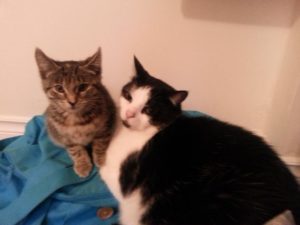