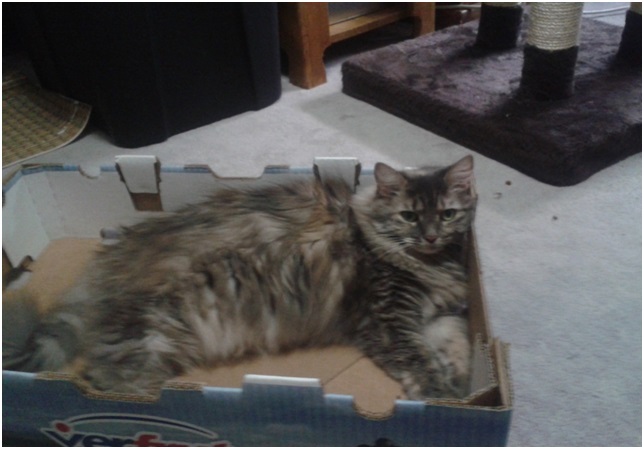 “Baby” Gillis is a lovely 3-year-old domestic medium-hair feline that was brought into Aimee’s home as a foster at first, but then became part of the family pretty quickly. At the beginning of Baby’s story, it was scary.  She most likely was confused about what was happening, as being in a new home is sometimes stressful. She hid away from the world in Aimee’s basement for a wee bit until she got the confidence to be more social with the rest of the family. As in every family, there can be some different personalities that sometimes clash, and unfortunately Baby had been a victim of cat bullying. Aimee got wind of this and dealt with the situation immediately, that gave Baby peace of mind!

Baby is now an older lady; Aimee had noticed Baby had been vomiting, and having looser-than-normal bowel movements. Baby was diagnosed with an overactive thyroid; the medical term is Hyperthyroidism. This is most frequently caused by an excessive concentration of a thyroid hormone called thyroxine-A also known as T4 in the bloodstream. Baby was treated with Tapazole for 4 years.

In September 2014, Baby had been losing some weight, just in small amounts; yet enough for her mom Aimee, to notice. By the next month, it was 3.5kg weight lost! Aimee knew something was wrong then, and jumped into action to ensure Baby’s health was taken care of. Within a short period of time, there was inappetence, and explosive diarrhea. When brought into North Town, the clinic ensured hospitalization occurred and Baby was placed on intravenous fluids right away. Baby was very weak from not eating, but responded to treatments and things were looking up for this beautiful feline.

Dr. Rennick put her thinking cap on and suggested an ultrasound to diagnose Baby’s condition. The result was Irritable Bowel Syndrome (IBS) or possible Lymphoma, and the next steps would be to have a biopsy done to distinguish between them. Aimee knew to wait a bit as Baby had been through so much, and that rest was needed to gain some weight back. The doctor had prescribed medications that Baby would have to take long term, and Baby seemed to be responding well.  She started eating better and not having such loose bowel movements.  IBS seemed to be the diagnosis, but careful monitoring will continue.

Now Miss Baby is 13 years old; due to the severe weight loss and inappetence that caused the IBS, she is on a strict diet as well as medications for the rest of her life. She sometimes has flair ups with her intestinal tract and small bouts of diarrhea.  Other than that, she is enjoying her retirement. She is still in good spirts and living life to the fullest as any of our furry friends should.