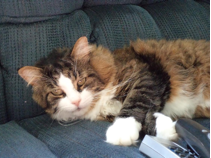 “The amazing activity of the cat is delicately balanced by his capacity for relaxation. Every household should contain a cat, not only for decorative and domestic values, but because the cat in quiescence is medicinal to irritable, tense, tortured men and women.”

George first met his dad Kevin in February of 2007 when he was a stray taken in by Kevin’s mother. At that point he was a full-grown Tomcat. Even then, he loved people. In October 2011, Kevin’s mother could no longer live independently, and George went to live with Kevin.

While with Kevin and Kelly, George was neutered almost right away. He adjusted quickly from being an outdoor roamer to being an indoor apartment cat. According to Kevin, “George showed himself to be a real people cat, but is not tolerant of other animals at all – he even likes kids!”

After a recent move to Brampton with his family, George fell ill with what owners thought was a urinary tract infection. George was brought to North Town and was diagnosed with a urethral obstruction. Kevin and Kelly elected to do whatever they could to help George get back to his healthy, happy self. While in hospital, George was unblocked and remained on IV fluids.

A few days after, George underwent a cystotomy surgery with one of our overnight doctors, Dr. Zeitoun, to remove the urinary stones that were blocking the urethra and preventing George from being able to urinate. Dr. Zeitoun removed 14-16 urinary stones that night! Following this surgery, George was on the mend.

Soon after, George required further treatment to prevent future urinary complications and minimize the risk of another blockage. He required a perineal urethrostomy, a surgical process during which the opening of the urethra is permanently enlarged. A few days after his initial surgery, George went into a second surgery with Dr. Musters.

George recovered well from his surgery and was able to return home to his family with a prescription diet and strict regimen of medications. While George was in hospital, he was all love for the employees! His purring was always audible, even from outside the ICU door, and when someone opened the cage door to see him, he’d roll over and present his belly for a rub! According to Kevin and Kelly, so far George’s rehabilitation process has gone well. North Town wishes George all the best!